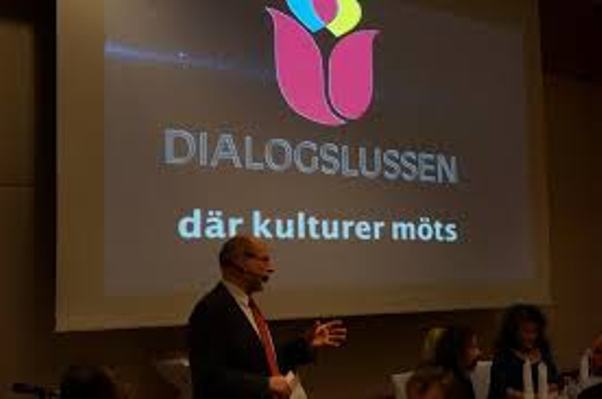 Renowned for its dialogue efforts across Sweden, the intercultural and interfaith dialogue institution, Dialogslussen, recently held its dialogue dinner that has come to be a tradition in Stockholm.

President of Swedish-Turkish Businessmen Federation (FEDEST), Omer Eken, in his address, said, as FEDEST, they cherish that people of diverse faiths, ethnicities or cultures come together around the same table. “What brought us here tonight is our appreciation of dialogue. Dialogue means to get to know each other, make acquaintance, understand and offer solutions to problems together. If we can achieve dialogue, then we can facilitate coexistence too,” he noted.

The minister Stefan Attefall remarked on the changed landscape in once homogenous Sweden, due to immigration. “It may look like immigration costs a lot to Sweden. But that is not the case. If you stop immigration, it will bring many sectors to a deadlock and, ultimately, a halt. It’s true that immigration forms a burden on the country, yet its pros outweigh cons. The diversity in society enriches and livens up Sweden. It makes us a more energetic and dynamic country at the same time, which is confirmed by studies as well,” Attefall said.

“We need to understand and learn from each other through such dialogue events. Not only Sweden but the entire world as well needs such occasions,” he added.

Björn Cedersjö reported they establish various consultancy institutions around the world that carry out efforts for integration and dialogue. “Decades ago, it was mandatory to be a Swedish Church member. Quitting was prohibited and whoever quit was penalized. Sweden is no longer like that. The arrival of immigrants has turned the society into a more transparent one,” Cedersjö remarked.

Next in the event was a musical performance by the couple Kudret and Burcu Ada. The attendees enjoyed delightful moments as they listen to the Turkish, Greek, Assyrian and Balkan music and converse along with newly-made friends over dinner.

Jasenko Selimovic, in his closing remarks, said, “This is my second time in this dialogue dinner series. It’s incredible! I am happy to be here. Despite the disputes on media over integration, it’s been working well in the society, I believe. Our people are cooperating to set up business. They are forming families. Meaning, integration has been perfectly going on in the society anyway.”

Finally Christian Democrats’ Annelie Enochson offered her remarks: “It is great to come together with people of diverse walks of life, faiths and cultures.”