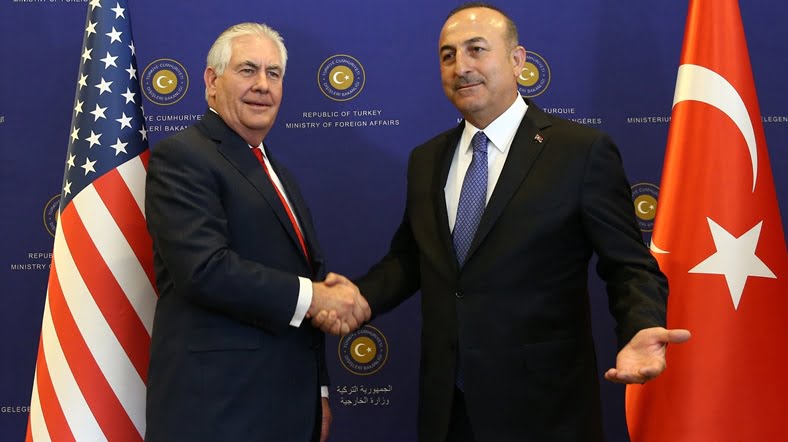 According to a story on Financial Times, the meeting between US Secretary of State Mr. Rex Tillerson and his counterpart Foreign Affairs Minister Mr. Mevlut Cavusoglu was tense as the US officials have privately said the evidence provided by Turkey has been inadequate, while voluminous. Below is related excerpts from the news.

Mehul Srivastava in Istanbul and Laura Pitel in Ankara

US secretary of state Rex Tillerson failed to soothe relations with Turkey after holding tense talks with President Recep Tayyip Erdogan on issues ranging from the Syrian conflict to the extradition of a Turkish cleric.

Mr Tillerson showed little movement on the main issues pushing the Nato allies apart: US support for a Syrian Kurdish militia that Turkey considers a terrorist group; Ankara’s demand for the extradition of Fethullah Gulen, the cleric it blames for a failed coup; and the arrest of a senior executive of a Turkish state-owned bank in New York this week, the officials said.

The tension was evident at a press conference Mr Tillerson held with Mevlut Cavusoglu.

Mr Cavusoglu also asked the US to grant the extradition of Mr Gulen, who has lived in self-imposed exile in Pennsylvania since 1999, while leading a network of Islamist sympathisers that penetrated the Turkish judiciary and military during a long alliance with Mr Erdogan.

The arrest this week of Mehmet Hakan Atilla, the deputy chief executive of HalkBank, for allegedly conspiring with an Iranian-Turkish citizen to help Iran evade US sanctions has further strained relations.

Mr Cavusoglu condemned the arrest as a political decision, and suggested that Preet Bharara, the recently fired US attorney for the Southern District of New York, and the judge in the case, were influenced by Mr Gulen.

“The former prosecutor [Bharara] has close relations with Feto [the Turkish acronym for the Gulenist movement] including the judge,” Mr Cavusoglu said. “They came to Turkey before, and they have participated in some political meetings and he has made some statements against Turkey.”

Mr Bharara recently retweeted a criticism of the decision by Mr Tillerson to avoid any meetings with the Turkish opposition during his visit.