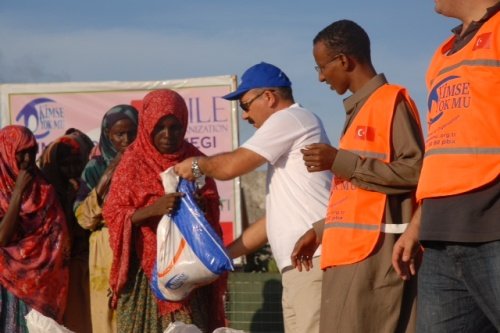 Kimse Yok Mu is distributing meat in packages in Somalia

Kimse Yok Mu humanitarian aid organization, a Hizmet-initiative, distributed meat to more that 230,000 families in about 45 different countries during the recent Feast of Sacrifice celebrations. Feast of Sacrifice is an important religious holiday celebrated by Muslims to commemorate the willingness of Abraham to sacrifice his son as an act of obedience to God.

Each and every wealthy Muslim sacrifices and animal (goat, sheep) and distributes most of its meat to the needy. Below is the story of how the Kimse Yok Mu reached out to the poor in many countries as part of Feast of Sacrifice (Eid al-Adha in Arabic, Kurban in Turkish). Feast of Sacrifice is celebrated annually on the 10th day of the 12th and the last month of the lunar Islamic calendar. Feast of Sacrifice celebrations start after the Hajj, the annual pilgrimage to Mecca in Saudi Arabia by Muslims worldwide. The date is approximately 70 days (2 Months & 10 days) after the end of the month of Ramadan.

In Turkey, 58,309 families were given Kurban (Feast of Sacrifice) meat in many cities such as Diyarbakir, Bingol, Mardin, Sirnak and mostly in Van; Abroad, 179,043 families in Somalia, Pakistan, Palestine, Bosnia and 43 more countries were delivered the Kurban meat as well. All of these people were waiting for someone to help them and this year their faces are smiling. Kurban meat was distributed to a total of 237,352 families

From Van to Diyarbakir, from Bingol to Kars KYM volunteers went everywhere and as a team they carried out effective and hard work to deliver the Kurban meat to the people. The aid activities were carried out carefully and exact in order to make the brotherhood bridges stronger, and the poor, the orphans, the elderly and disaster victims all joined in the happiness of the Kurban holiday. Kurban meat was distributed in 7 kilogram private packages.

HUNDREDS OF VOLUNTEERS SPENT HOLIDAY WITH THE EARTHQUAKE VICTIMS

On October 23rd, a 7.2 earthquake hit Van and the quake victims had severe pain. To fix this pain, hundreds of volunteers spent the Kurban holiday in Van and Ercis. Volunteers simply said that is time for brotherhood and left their families to share the victims burdens. On the second day of the Kurban holiday, many donating businessmen and artists join them. Celebrities visited the people living in the tents and helped in delivering the Kurban aids to the victims. 10,920 Kurban meat packets were delivered to the disaster region and volunteers also spent time with the children and gave them gives and holiday allowance.

The KYM association organized Kurban aid organizations all around the world and made people who were waiting for a helping hand smile. KYM volunteers were welcomed in Somalia with great joy. More than 100 volunteers took part in Kurban organizations in 5 different places. 16,700 Kurban shares were sacrificed in Somalia and given to more than 50,000 families.

Kurban joy was also brought to the Dadaab camp. At the camp, on the Kenya border, 8050 shares of Kurban meat was given to the Somalian people which are living in the camp.

In 2010, Pakistan was shaken by floods and the people which are still living in tents laughed with KYM during the Kurban holiday. The volunteers didn’t leave them alone, as usual, during this Kurban Bayram. KYM volunteers delivered Kurban aids to 20 different regions and to 12,306 families in need.

Somalia, Pakistan, Bangladesh, Lebanon, Ethiopia and many different regions, local officials joined the aid organizations and thanked the Turkish people and the KYM association. They also gave a plaque of thanks to KYM officials for their aid organizations.