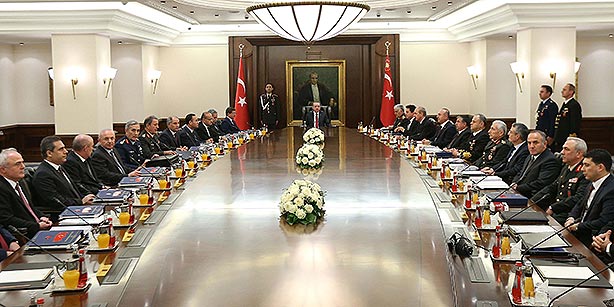 “Mr. Bülent Ecevit chose not to sign [into law] the decisions made by the MGK on the grounds that [the decisions] limited freedoms, but Mr. Erdoğan signed them. According to these documents, the Gülen movement [also known as the Hizmet movement and inspired by Islamic scholar Fethullah Gülen], the Nur movement, the Kadiri movement, the Nakşi movement, the Süleymancılar community and many others were found guilty [of breaking the law]. In other words, those who created the [Justice and Development Party] AK Party were guilty. The Gülen movement is/was the first to notice that,” Türker said during a visit on Tuesday to the western province of Denizli as part of his party’s campaign ahead of the June 7 general election.

The document, identified as MGK Decision No. 481, asked the government to develop an action plan to pursue the MGK’s recommendations and instructed the Prime Ministry Implementation and Monitoring Coordination Council (BUTKK) to coordinate the ministries and monitor whether the steps were being implemented.

The MGK’s decision also urged the Foreign Ministry, Interior Ministry and National Intelligence Organization (MİT) to closely monitor and report on the activities of the Gülen movement at home and abroad. It advises the government to instruct the Interior Ministry and Ministry of Education to investigate and monitor schools affiliated with the Gülen movement and report their activities to the BTK.

The MGK, which was seen as a shadow government, especially during the 1990s, is the highest state body created by the 1960 military coup. The military became part of the executive branch through the MGK, joining the president and a committee of ministers. It became the final authority in decisions on a wide range of issues, including law, the economy, education, rights and freedoms. Though its decisions were expressed as advice on paper, they were treated as direct orders by the government.

Türker also said that the government decided to close down prep schools — institutes known as “dershanes” that help Turkish students prepare for standardized high school and college entrance exams — in the year 2010 but kept it a secret until 2013.

In a surprise move, the ruling Justice and Development Party (AK Party) decided in November 2013 to shut down the prep schools, stirring a massive debate. These schools, with their affordable fees, are regarded by middle and lower-income families to be an equalizing force when it comes to seeking a better education for their children. The AK Party’s bill was put to a vote and passed by Parliament on March 7, 2014, and signed into law by then-President Abdullah Gül on March 12. The law states that prep schools will be allowed to operate until Sept. 1, 2015, though some have already been pushed out of operation.