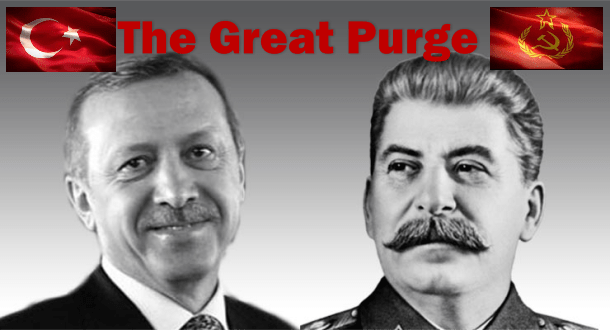 Mert’s story is just one of many and typical of the current situation in Turkey. He had voiced concern in group meetings, as he always did, but instead of citing personal disagreements on the day he was laid off, he said his boss accused him of having links to a terrorist organization. Speaking under an alias to avoid repercussions, Mert, 37, said he was dismissed from his job at an Ankara government ministry last fall for questioning his superiors.

“He said I was a Gulenist,” Mert told DW, referring to Fethullah Gulen, an exiled cleric who the Turkish government blames for plotting last year’s failed coup. “To make such a claim is ridiculous because he knew it wasn’t true. He just wanted to get rid of me.”

Since then, Mert has remained without work and his passport has been revoked. Similar to the more than 150,000 people who have been sacked or suspended in Turkey’s ongoing purges, Mert has been rendered unemployable by his dismissal, which is all too visible to prospective employers in Turkey’s social security database.

“I am blacklisted and this is much worse than you can imagine,” Mert said.

Turkey’s Justice Ministry data shows that about 50,000 suspected Gulenists have been jailed since the coup. During the same period, 110 media outlets were shuttered and more than 100 journalists were imprisoned, including German-Turkish correspondent Deniz Yucel. Turkey has now more jailed journalists than any other country in the world, according to Reporters Without Borders.

Dozens of elected representatives with the country’s second-largest opposition party, the pro-Kurdish Peoples’ Democratic Party (HDP), have also been imprisoned or dismissed, including co-chairs Selahattin Demirtas and Figen Yuksekdag.

The purges show few signs of abating as President Recep Tayyip Erdogan has ruled out the possibility of lifting the year-old state of emergency imposed following last year’s failed coup.

In the last few days, dozens of academics have been detained at the Bogazici and Medeniyet Universities in Istanbul, more than 100 IT workers arrested and warrants issued for the detention of 51 people, including 34 former employees of the state television network, TRT. On Friday, Turkey dismissed another nearly 7,500 civil servants.

Eser is the second Amnesty staff member to be detained within the space of a month, joining the organization’s local chairman, Taner Kilic, who was arrested in June on similar charges. While members of Amnesty International have been arrested in the past by other governments, having two leading figures simultaneously behind bars is unusual, said Andrew Gardner, a researcher for Amnesty Turkey.

“It’s a test case,” Gardner told DW. “If 10 human rights defenders end up in prison, there’s no guarantee that next time it won’t be me or someone from HRW [Human Rights Watch] or someone from the Human Rights Association. There’s no security for anyone if this is allowed to pass.”

‘A kind of torture’

According to Sebnem Korur Fincanci, president of the Human Rights Foundation of Turkey (TIHV), the crackdown on dissent began prior to the failed coup and was accelerated in the aftermath.

While Turkey’s human rights record has long caused international concern, Fincanci said what worried her most was the worsening conditions in prisons holding suspected coup plotters. Over the last year, she said she received reports showing increased use of solitary confinement, strip searches and, at times, physical violence. Methods of detaining suspects have also become more brutal, Fincanci said, citing recent cases where women were detained in hospitals days after giving birth.

Fincanci says the most difficult aspect of Turkey’s political climate is not knowing who will be targeted next.

“Not being able to know what happens next and having this uncertain future is the most disturbing situation, I think,” she added. “This is a kind of torture in a way.”