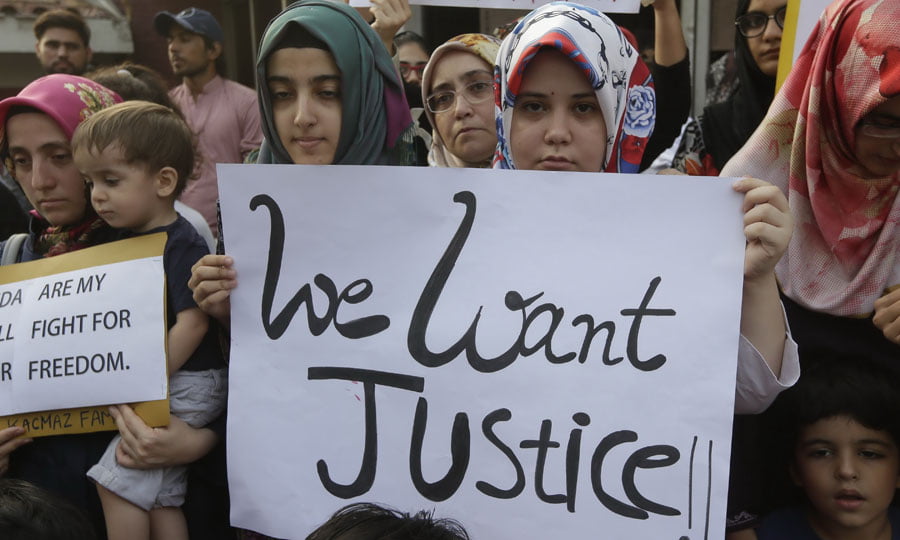 More than a dozen plain-clothes men and women in light blue wagons used by law enforcement agencies forcibly entered a house in Wapda Town Lahore at midnight of Sept 27, where a former director of PakTurk Schools Mesut Kacmaz was residing with his family. They blindfolded the Turkish schoolteacher, his wife and two teenage daughters and took them away.

Police refused to lodge the complaint of the victim’s family despite repeated efforts. The family had an asylum certificate from the United Nations High Commissioner for Refugees (UNHCR), a refugee protection agency of the UN.

Two lady constables were pulling her to get Mesut’s wife on her feet. The couple’s two teenage daughters were crying loudly and some ‘police officers’ were trying to push Mesut towards the door. Mesut protested and a scuffle took place. Mesut received some blows on his face.

On Oct 4, some men in plainclothes took away Zekeriya ener Özahin, former director of a PakTurk school in Islamabad around 4pm. He was dropped back near his house after four hours.

The recent abductions are a worrisome turn in the story of nearly 250 Turkish teachers and their families residing in Pakistan on UNHCR asylum seeking certificate.

These Turkish teachers, associated with PakTurk International Schools in Pakistan for the past several years, were asked by Pakistan to leave the country last November on the demand of Turkish President Recep Tayyip Erdogan. The Turkish president believes Islamic scholar Fethullah Gulen and his movement plotted the July 2016 coup-attempt against his regime. The PakTurk school system is said to have been started by Gulen’s supporters — the reason why this is one of Erdogan’s targets, despite its management having repeatedly denied links to the movement or the coup-attempt.

“There were about 15 plain-clothes ‘police officers’ inside the house. Out of 15, five were lady constables. They did not conduct any search-and-seize procedure, nor did they turn the house upside down. The ‘police officers’ were pushing and shoving to arrest them,” says Fatih Avcı, a Turkish language teacher who was living in the upper portion of the same house.

Avcı was also picked by the raiding team but was later freed because his name was not on the “list”, according to some reports.

“I saw Meral, Mesut’s wife, lying on the floor. Two lady constables were pulling her to get her on her feet. The couple’s two teenage daughters were crying loudly and some ‘police officers’ were trying to push Mesut towards the door. He was protesting the raid. When I saw sheer display of disproportionate power applied on Meral, I protested and the ‘officers’ arrested me and took me downstairs,” Avci says in his written complaint to the local police station, which was not entertained.

“These were Toyota Hilux pickups. The ‘officers’ blindfolded all of us first and later slipped hoods on our heads (including on Meral and their two daughters). I was handcuffed in the front. They could not handcuff Mesut so they tightened a cloth strip around his wrists. Mesut protested and a scuffle took place. Mesut received some blows on his face,” he recalls.

Turkish families, gripped in fear, have moved the Lahore High Court against the abduction, fearing the family may be deported to Turkey. The court, admitting the petition, has barred the government from deporting the family and has asked the state attorney to explain the situation.

Turkish families, residing in different parts of the country where they run schools, have also moved the Islamabad High Court, Sindh High Court and Peshawar High Court for their protection and security.

“We have been in Pakistan for almost 22 years, educating the children of this country selflessly. Throughout these years, we have not been involved in any activity that is illegal or detrimental to peace. There has been no charge of terrorism, extremism or any crime on us and our schools in the past two decades. We have invested in Pakistan in the field of education and we are a peaceful community involved in this noble profession,” Umit Yazici, a former principal of one PakTurk schools, tells The News on Sunday (TNS).

He says his community feels harassed by the law enforcement agencies, especially in Lahore and Islamabad. “We are seriously concerned about our safety and well-being. We immediately request the state authorities to provide more details about this illegal incident and ensure the return of our colleagues with immediate effect.”

In the court pleas, the Turkish families have said the government is taking this step to harass them and force them to go back to Turkey where they will be arrested immediately on political grounds. They said the court had previously restrained the federal authorities from deporting the Turkish nationals who were performing teaching duties at the schools. They feel they are being pushed to the wall and their right to live is being compromised on political grounds by the Pakistani government, which needs to pay attention to this issue on human grounds rather than political.

The abductions of Turkish people came almost two weeks after CM Punjab’s two-day visit to Turkey. During the visit, he had met Turkish leadership and exchanged views on different matters of “mutual interest”.

The deep ties between the Sharifs and Erdogan are well-known in the country. Turkey is generously investing in Pakistan. A day after the abduction of the Turkish family from Lahore, CM Sharif inaugurated the Pakistan-Turkey Health Expo with 39 Turkish companies participating in the event.

Prominent human rights activist and counsel of Turkish families, Asma Jahangir, has demanded the government to immediately produce the abducted former principal of the Pak-Turk School and his family before the court. “The court has already given them permission to stay till the expiry of their asylum certificate from the UNHCR, which is still valid for another month,” Jahangir tells TNS. “How can a government or a security agency violate the court order and international human rights convention on refugees signed by Pakistan.”

She says these families have not committed any crime, their expulsion is purely political, and “their lives are in danger if they are deported to Turkey”. She calls for a proper procedure to sort out the matter instead of using force and illegal means. She says even the police refused to lodge the case, which “indicates something is fishy. It is difficult to name anyone for the abduction of the Turkish family but the eyewitness statement points towards law enforcement agencies.”

Following the incident, Senate’s human rights committee has also taken serious notice. PPP senator, Farhatullah Babar has submitted a call-to-attention notice in the Senate regarding the issue. “It is a matter of grave and urgent public importance and the situation points to pathetic helplessness of state institutions in addressing the issue of forced disappearances,” he says. “It is a serious issue of human rights and right-to-live when the lives of these teachers and their families are in danger in Turkey due to political reasons.”

PakTurk International Schools and Colleges started in Pakistan in 1995, with their first branch in Islamabad. The schools were initially meant to educate Afghan refugees. With the passage of time, they became a successful venture. Currently, it has 26 schools across Pakistan. They teach nearly 11,000 students, employ 1,500 teachers and have more than 100 Turkish staff. The foundation has been delivering education from preschool to grade 12 according to Pakistani law and curriculum for the last 21 years.