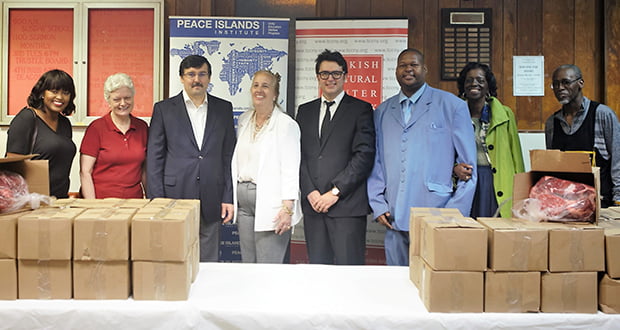 Manhattan Borough President Gale A. Brewer joined the Turkish Cultural Center and Peace Islands Institute New York, non-profit organizations based in Manhattan, and Embrace Relief, a global relief effort providing aid to the underserved and those struck by disaster, in donating 1,500 pounds of meat to Mount Olivet Baptist Church in Manhattan.

The contribution was made as part of an observance of Eid Al-Adha, a Muslim festival also known as the Feast of Sacrifice; according to Islamic custom, observers distribute meat as charity to commemorate Abraham’s obedience to God as he was tested to sacrifice his son. Joined by Food Bank of NYC, community leaders, Borough President Brewer spoke to the importance of serving the less fortunate in the borough.

Since that time, Muslims have celebrated the holiday by sacrificing animals and donating two-thirds of the meat to the hungry.

The meat drive, spearheaded by the Turkish Cultural Center , Embrace Relief and Food Bank of New York City began during the September 1st celebration of the Muslim holiday of Eid ul Adha (The Feast of Sacrifice), which encourages the donation of food to the hungry.

Turkish Cultural Center New York and Embrace Relief distributed the 1500 ponds meat — which is packed in 500 boxes — to the Mount Olivet Baptist Church in Manhattan.