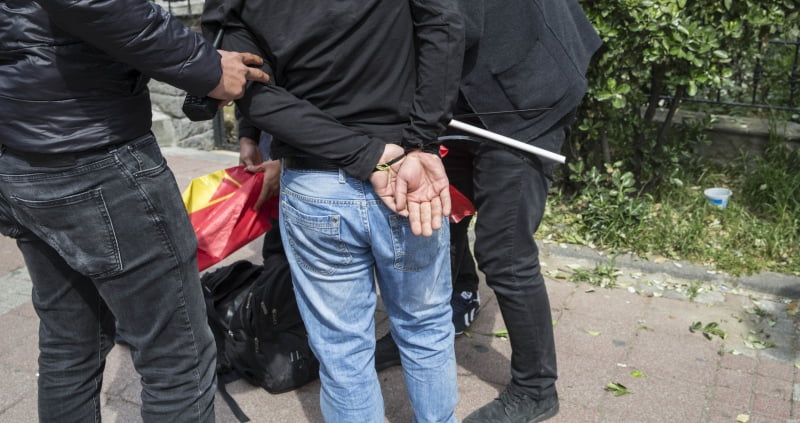 Police arrest a demonstrator in Istanbul on May 1. (SIPA USA via AP)

Syrian and Yemeni students have been detained, deported, or turned back at the airport after leaving the country and trying to return, Al-Fanar Media reporters found in a series of interviews. Human rights organizations are as yet unaware of the situation. (Many human-rights organizations have specific concerns such as protecting journalists or professors, and do not consider students part of their purview.)

Mohammed al-Mashhari, the Yemeni consul in Istanbul, confirmed the arrest of students from his country. “Most Arab and international students who were previously studying at universities linked to Fethullah Gülen are under threat,” he said.  “Students who haven’t been arrested yet are afraid of being detained or deported.”

Ibrahim Tawfiq Mohammed Anam, a Yemeni student, was arrested by Turkish police on March 14 and held at a detention camp for foreigners in Izmir, his uncle said. Two days later, Faysal Bsata and Abdel Salam Salem, two Syrian students, were both also detained by Turkish security forces at the immigration office in Gaziantep, according to HarekAct, a platform that monitors Turkish treatment of migrants. Both students were at the center to renew their residence permits: Bsata was subsequently deported.

No reasons were given for the detentions, according to interviews and published accounts. But the three students were all studying at universities closed by the Turkish government last summer following the unsuccessful coup attempt in July 2016. By the end of the summer, the government had closed 15 universities, according to Scholars at Risk, a New York-based group that tracks academic freedom issues. The closed universities were said by the government to be affiliated with the Hizmet (Service) movement Gülen leads and whom Turkish President Recep Tayyip Erdogan blames for an attempted military coup.

Anwar Abdu, uncle of the detained Yemeni student, said that Turkish authorities are putting pressure on his nephew and preparing to deport him. “He did not do anything wrong,” Abdu said.

Anam came to Turkey three-and-a-half years ago as a self-funded student. He started studying at Zirve University in Gaziantep, then moved to Gediz University in Izmir, so he could study electronic engineering in English. Later, he was one of hundreds of students who were transferred to other state universities after institutions suspected of being Gülenist were shut down. When Anam went to the Turkish immigration department to renew his residency, his request was denied. A few weeks later he was detained. “The Yemeni embassy is trying to help; but he could still be forced to leave the country without completing his studies,” his uncle said.

The arrest of students is part of a broader crackdown against suspected Gülen supporters. Turkish police have detained more than 1,000 civilians and suspended over 9,100 police officers in April on suspicion of links to Fethullah Gülen, according to the Anatolia news agency. The crackdown followed the April 16 referendum that centralized power in President Recep Tayyip Erdoğan’s hands.

None of the detained students contacted by Al-Fanar Media have been  informed of any charges against them. Turkish police are encouraging the detained students to sign forms saying they are leaving voluntarily, even though they actually want to stay in Turkey and continue their studies. “My brother was under great pressure to sign a voluntary-departure form to move to any country that accepts Syrians without a visa, but he refused,” said a brother of one of the detained Syrian students. “If he continues to be detained, he will not be able to take his final exams this year.”

Some Syrian and Yemeni students have already been deported. “I left Turkey without any record of grades in courses or any documents that prove my study. I can’t enroll at any Yemeni university now and do not know what to do,” said Zeid Mughir, a Yemeni student who was deported to Sana’a last year.

Mughir came to Turkey to study at his own expense and began studying Turkish for a year at the University of Pamukkale in Denizli, a city southwest of Istanbul. Then he moved to the İskenderun Teknik Üniversitesi, in the southern city of Hatay. None of the two universities were associated with Gülen. But Mughir was living in student housing affiliated with the Hizmet movement, which is associated with Gülen.

“Two weeks after the failed coup, the police stormed the building and arrested many students including me. The police forced me to sign a pledge saying I am a member of the Hizmet, then they deported me to Sana’a,” Mughir said.

Another female Yemeni student, who was studying business administration at one of the universities suspected of being associated with Gülen in Turkey three years ago and asked not to be named, also faces an unknown academic future. “I did not do anything illegal,” she said. “I was studying at a legal university and when the government shut it down, we were transferred to another one. But when I went to the immigration department in the Fatih district of Istanbul to update my contact information I was arrested and held in detention for two weeks, then deported to Yemen.”

Now she is in Sana’a and has hired a Turkish lawyer to help her to go back to Turkey or to get a copy of her transcript so she does not have to start her studies all over again.

No one has collected statistics on the number of deported students. But Arab students′ fear is increasing daily. Many students are not renewing their residency at the immigration department to avoid possible arrest, even though it puts them into illegal status.

Human-rights organizations seem unaware of what is happening to the students. “Unfortunately we have not worked on the situation of international students, so we are unable to comment on the issue at present,” the Turkey representative for Human Rights Watch wrote in an email to Al-Fanar Media.

Scholars at Risk is investigating the situation. “We understand that students from the closed universities were to be transferred or allowed to transfer to state universities in the region, but we also understand that for some students this was not a practical option or was not even possible,” wrote Daniel Munier, a program officer with Scholars at Risk. “Unfortunately, we cannot offer a clear understanding of the situation of the international students at these universities.”

The Turkish parliament has extended a state of emergency by another three months to July 19, which gives the security forces extensive powers. The fate of international students remains in their hands, while legal or diplomatic action seems unlikely to prevent students’ detention or deportation.

The ongoing hospital constructions in Somalia, Uganda, Ethiopia and Kenya can be listed as the most typical examples of Kimse Yok Mu’s sustainable development projects which are aimed at fulfilling the medical needs. The hospitals underway in four different countries will be equipped with 35 beds, 2 operation theatres, 2 delivery rooms, 1 intensive care and newborn unit, 12 outpatient service rooms, radiology service and labs.