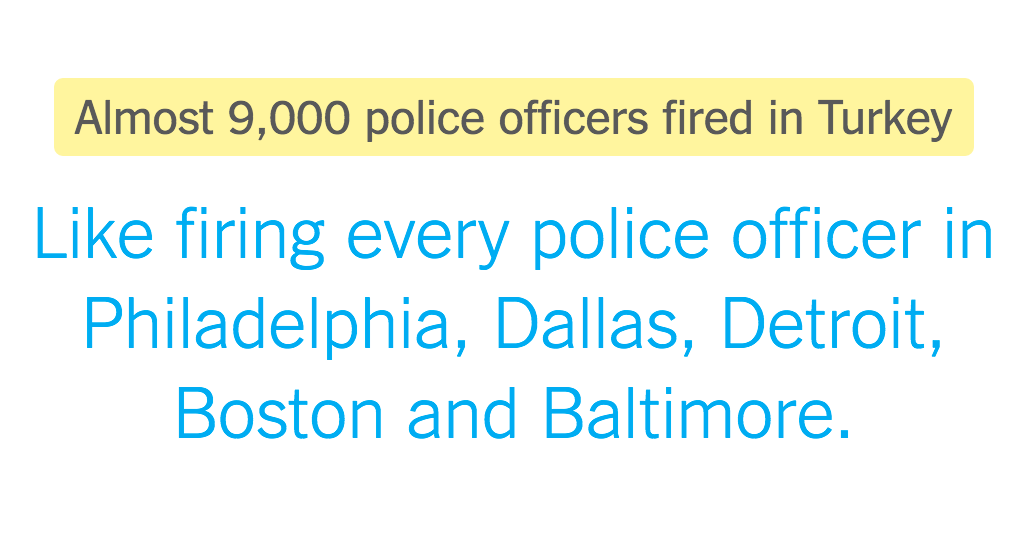 The Interior Ministry fired the police officers, some of whom government officials said had supported the coup attempt. Turkish officials have acknowledged that the number of people targeted in the purge is probably much greater than the number of conspirators.

third teacher in private elementary and

high schools across the United States.

In addition to the teachers suspended, the government intends to close more than 1,000 private schools it linked to Fethullah Gulen, a cleric who the government said was the mastermind of the coup attempt. (Mr. Gulen has denied this, and his level of involvement remains unclear.) Followers of Mr. Gulen have sought to gain power within Turkey by infiltrating state institutions, often successfully.

Education officials said they planned to convert the schools into public schools and hire 40,000 new teachers.

officer in the U.S. Army into custody.

The military, which has long been a unifying force for the country, is now deeply divided, diminished and discredited. A rebel faction of the military initiated the coup attempt.

Since then, nearly half of the top generals and admirals have been jailed or dismissed and more than 5,000 army officials have been sent to pretrial detention.

2,745 members of the judiciary suspended

The future has been uncertain for the judges and judicial staff members suspected of being followers of Mr. Gulen — including two members of Turkey’s highest court — since a board of judges and prosecutors suspended them a day after the coup attempt.

Government officials said they intended to hire 5,000 new judges and prosecutors by the end of August. Mr. Erdogan also announced a three-month state of emergency that enables his ministers to pass decrees that have the force of law with the approval of Parliament.

of the U.S. Department of Education.

The officials who were fired from the Education Ministry had responsibilities that included appointing teachers and preparing curriculum. The evidence against them is unclear.

Ministry officials said the school year would begin in September as planned, but a variety of exams, including distance learning and public officer exams, have already been delayed.

Every university dean in Turkey was forced to resign without an explanation of who would replace them or whether they would be allowed to reapply for their jobs.

“Who is going to run the universities? They will open in six or seven weeks,” Steven A. Cook, a Turkey expert at the Council on Foreign Relations, said in the week after the coup attempt.

Some academics who signed a petition this year protesting the government’s war against Kurdish militants were also suspended from their jobs.

More than 100 media outlets shut down

closing television and radio stations and

More than 100 broadcast, newspaper, magazine and other media companies have been shut down, and at least 28 journalists and media workers were detained, according to the Committee to Protect Journalists. Many of them were pro-Gulen.

“The scale of this rout of the media is staggering,” Nina Ognianova, the committee’s Europe and Central Asia Program coordinator, said in a statement.

Turkey has long been criticized for its press restrictions. In the past, critical journalists have faced legal investigations and, in some cases, long prison sentences.

at the U.S. Treasury who regulates

banks and designs and prints money.

The government suspended more than 1,500 finance officials within the first two days after the attempted coup. Prime Minister Binali Yildirim said the episode would not have a major effect on the country’s economy.

“We have such a strong economy that we overcome this coup with small scratches,” Mr. Yildirim said.