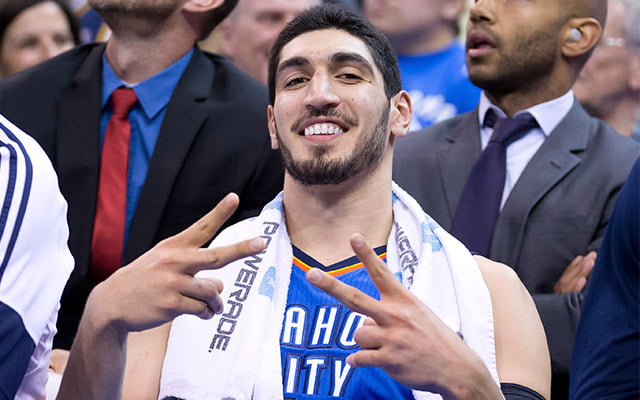 The Turkish native and six-year NBA veteran said he would offer more details at a press conference on Sunday in New York.

All good baby!
Gonna give press conference tomorrow in NY.
Got lots of things to say with lots of crazy stories.
Be ready!!!
Ohhh Yeeahhh pic.twitter.com/CXktUXk2PS

Kanter, who turned 25 on Saturday, had said in a video posted to Twitter on Saturday morning that police officers have “been holding us here for hours” upon arrival to Bucharest on a flight from Indonesia, where he was visiting as part of a global tour for his charitable foundation.

The 6ft 11in post man, who has become a high-profile critic of Turkish president Recep Tayyip Erdoğan, said his passport was “canceled” due to his political beliefs.

“The reason behind it is just, of course, my political views,” Kanter said, “and the guy who did it is Recep Tayyip Erdoğan, the president of Turkey.”

I’m being held at Romanian airport by Police!! pic.twitter.com/uYZMBqKx54

A league source told the New York Times that the NBA worked with the state department to help get Kanter to London and that the next step was to get him back to the United States.

“Today at around 1pm local time an individual arrived from Frankfurt,” Romanian border police spokesman Fabian Badila told the Times. “My colleagues established that his travel documents weren’t valid, that they had been canceled by his home country, so he wasn’t allowed to enter the country.

“At around 5pm, he left the airport on a flight to London,” Badila added. “While he was at the airport he wasn’t detained or locked up, he was allowed to wander around, but he couldn’t enter the country.”

Last year, Kanter revealed he received death threats in response to his support of exiled Muslim cleric Fethullah Gülen, Erdoğan’s political rival. The posts, written in Turkish, include phrases such as “You will die soon” beside ominous images of weapons and nooses.

Kanter spoke out against Erdoğan’s government in March after a terrorist bombing in Ankara that killed 37 people and injured more than 100, criticizing the country’s obstruction of broadcast media and access to social media.

This week, Erdoğan’s visit to the White House was marked by a clash between his security detail and protesters outside the Turkish ambassador’s residence. Nine people were hurt and two arrests were made.

“He’s attacked people in Washington. He’s a bad, bad man,” Kanter said in the video. “He is a dictator, and he’s the Hitler of our century.

“I will keep you posted guys, but just pray for us, and I’ll tell you guys what’s going on.”

Previously, Kanter, who was tabbed with the No 3 overall pick in the 2011 draft, said he was left off Turkey’s national team for EuroBasket 2015 due to his political views, a claim denied by national team coach, Ergin Ataman.

Kanter averaged 14.3 points and 6.7 rebounds in 72 games with the Thunder, who lost in the first round of the playoffs to the Houston Rockets.