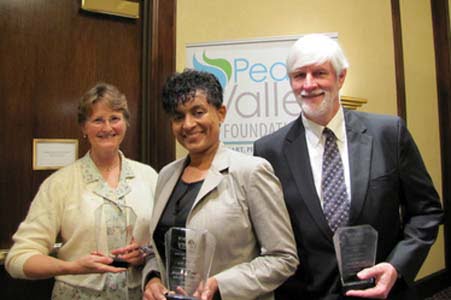 At about the same time tonight, April 18, 2013, that a keeper of the peace at Massachusetts Institute of Technology was fatally wounded by gunshots; in the same week that some vicious destructors left bags of explosive shrapnel aimed at runners, family and children at the finish line of the Boston Marathon; in the same month that the nuclear bombast from North Korea gave everyone in the world a headache, I was among three awardees given a lovely dinner and inspiring words by the Huntsville chapter of the international Peace Valley Foundation.

Also recognized were Chanda Davis, an award-winning advanced science teacher at Huntsville High School, for her work in education, and the Rev. Frank Broyles for his career spent integrating his work as a pastor with community-building, barrier-surmounting, bridge-building leadership in Huntsville.

I find it sadly ironic that the work of peace was being celebrated in one corner of our country while in another a gunman possessed by some devil was doing the work of war. That doesn’t quite balance out, but a determined embracing of peace and community anywhere is cause for joy and a reminder that human beings are about more than destruction.

The Peace Valley Foundation is part of an international network of non-profit education and community organizations inspired by the teachings of Fethullah Gulen – a professor and religious leader announced today (Thursday, April 18, 2013) as one of the “100 Most Influential People of 2013” by Time magazine, who describes him “the most potent advocate of moderation in the Muslim world.”

Detractors claim that Gulen is a cult leader who inspires mindless obedience and is trying to take over the world. But people who are trying to take over the world have either religious fanatics or political zealots on their side – and the volunteers who spend their personal time, energy and money for Peace Valley projects are held in suspicion by both bigots and zealots.

Sometimes you can accurately judge the quality of a movement’s character by the characters who are fighting it.

I admit: Gulen’s teachings are, in fact, hard for us to understand in an age where religion is too often co-opted by factions jockeying for political power – whether in the U.S. or in the Middle East. Gulen teaches that being serious about one’s personal faith does not negate one’s ability to also respect those who do not share that faith. Gulen teaches that faith should influence people in power – but that power should never be used to impose faith on others.

That’s a paradoxical understanding of the role of religion in the public square that other, wise people, notably Tony Campolo, Os Guinness, Wayne Flynt, Jim Wallis and Eric Metaxas, are also attempting to explain in our age of absolutist all-or-nothing thinking.

“Gulen reminds us that civilizations do not have to clash; civilizations can cooperate,” said the Rev. Dr. Loye Ashton, a professor religious studies at Tougaloo College in Jackson, Miss., who was the keynote speaker.

“Through interfaith dialogue, I have learned about the beliefs of others – and at the same time learned more about my own beliefs. What Muslims have taught me is how to be a better Christian.”

“True love for others is how we move from being merely human to being humane.”

Ashton is at work on a book about the influence of Fethullah Gulen, including a look at the organizations who have raged against Gulen’s message of hospitality and cooperation.

Gulen himself is influenced by Sufi Muslims, the mystical, joyful expression of Islam that emphasizes the rhythm and grace of God more than doctrine and dogma. That’s not to say that Sufi Muslims are not also observant Muslims – just that they value relationship, whether between God and themselves or between others and themselves – over rigid application of religious law.

I’m honored to have been chosen for an award by the group. And, with Fethullah Gulen, I pray that peace and hospitality will increase in every valley and on every mountaintop of the world, and that the bombers, shooters and destroyers of peace will lay down their weapons and take their places at the table of all humanity.