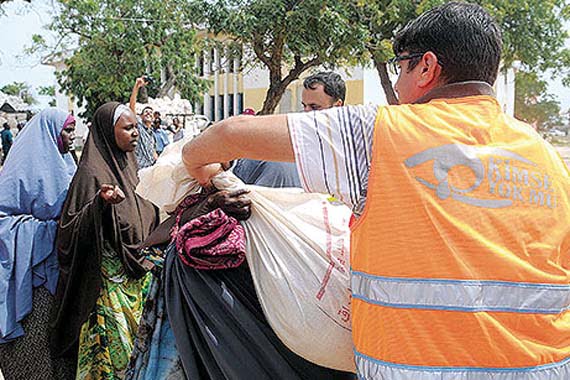 Turkish charity foundation Kimse Yok Mu (Is Anybody There) has offered aid packages to 1,650 families in famine-stricken Somalia, a country that has been in the grip of civil war and terrorism for many years and is currently one of the countries most affected by drought in East Africa, during the holy month of Ramadan.

The fasting month of Ramadan, deemed the sultan of all the months by Muslims, is considered the most venerated, blessed and spiritually beneficial month of the Islamic year. During this month, prayers, fasting, charity and self-accountability are particularly emphasized, and all obligatory religious observances are further encouraged at this time, as this month was called by the Prophet “the month of my people [Ummah].”

For this reason, Kimse Yok Mu has intensified its charitable efforts during the Ramadan. As it does every Ramadan, Kimse Yok Mu has lent a helping hand to people in need in the Somali capital of Mogadishu this year. Kimse Yok Mu distributed 25-kilogram aid packages, containing basic needs, such as rice, pasta, sugar, flour and oil, to a total of 1,650 Somali families.

The Kimse Yok Mu official organizing this aid campaign, Bilal Köse, who is also the person in charge of all Turkish schools operating in Somalia, says they plan to provide aid to many more people in need in Somalia with new aid campaigns.

Mogadishu residents receiving their aid packages said they were very happy with the help coming from Turkey, adding that they believe the Turkish and Somali peoples are brothers. Residents also said they would never forget the aid that Turkey has been providing them with in the difficult period they have been experiencing in the last few years.

In addition to distributing aid packages, Kimse Yok Mu has also organized iftar (fast-breaking) dinners for 1,000 Somalis in need each day during Ramadan in Mogadishu.

A Kimse Yok Mu official in Somalia, Mehmet Bozbağ, says: “We give this aid in the name of God. We experience the happiness of providing Turkish aid to Somalia, which has been the scene of great human tragedy as many people starve to death each day, during Ramadan, which reminds people the significance of unity, solidarity and helping each other.”

Stating that people in Somalia live in hunger and poverty, Bozbağ added that the aid campaigns for Somalia will continue even after Ramadan.

Turkish humanitarian aid association Kimse Yok Mu has announced that it will donate $1 million to the victims of the typhoon-hit Philippines from its emergency funds. The death toll in the Philippines is believed to have exceeded 10,000. The typhoon, with winds raging at 275 kilometers an hour, has left behind scenes one would expect to see in the apocalypse, according to Kimse Yok Mu volunteers.