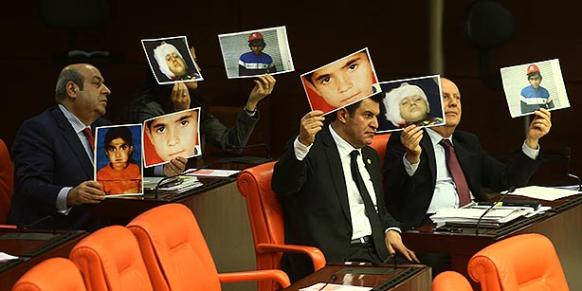 Lawmakers from the pro-Kurdish Peoples' Democratic Party (HDP) hold up the photos of children allegedly killed by security forces during a debate on the controversial security bil at the Parliament on Feb. 19. (Photo: AP)

Freedom House, which describes itself as “an independent watchdog organization dedicated to the expansion of freedom around the world,” responded to the passage of the first 10 articles, issuing a statement late Monday.

The director of Freedom House’s Eurasia programs, Susan Corke, said, “It is no exaggeration to say that the future of Turkish democracy hangs in the balance with this law.”

Corke also pointed out that “the new legislation undermines the accountability and oversight of police and prosecutors as well as citizens’ trust in these principles, which are at the core of democracy and rule of law.”

“The legislation will eviscerate critical checks on search and detention, while exacerbating the problem of politically-appointed governors overseeing police operations. Widening the scope of when police may use firearms against protesters is dangerous and out of step with UN guidelines on the use of force by law enforcement,” Corke added.

Ten articles of the 132-article bill were passed after midnight on Saturday. The bill allows police officers to wiretap telephones for 48 hours before a court order is issued. The police will need to submit a request for a wiretap within 24 hours, but the judge is only required to deliver a judgment on the issue within 48 hours. Currently, a judge needs to rule on the issue within 24 hours. Prime Minister Ahmet Davutoğlu has defended the bill, claiming that it is in harmony with EU norms.

The main aim of the bill, according to the government — which has been pushing to pass it — is to prevent public order from being disrupted by illegal demonstrations and to maintain public security. The government claims that those who oppose the bill want the use of Molotov cocktails to go unpunished, although the claim was previously denied by opposition parties.

Six more articles of the controversial bill were passed late on Monday after Freedom House issued its statement criticizing the bill.