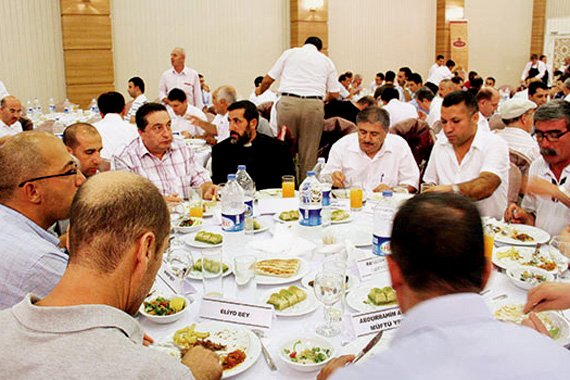 DIGIAD’s president Alaaddin Korkutata in his speech underlined that there is a peaceful atmosphere because of the “Settlement Process,” which was initiated by PM Recep Tayyip Erdogan by taking enormous risk; the process has also given hope to people. Mr. Korkutata said, “Warplanes were flying over our Iftar last year; There have been no significant incidents recently except for few provocative ones.”

Minister of Food, Agriculture and Livestock Mr. Mehdi Eker praised in his speech that people from all walks life in Diyarbakir are represented at the Iftar. He said Turkey’s regime had problems with his own people. The state had divided its people into races, colors and ethnicities, which created problems. “We have made important progress for the solution in the last seven months despite some provocations, we wish that the settlement process will end with peace,” he added.

Minister of Finance Mr. Mehmet Şimşek pointed to the fact that Turkey has been in a process of change and transformation, which was achieved through political stability. Peace and tranquility came to the region and an investment burst is expected. Mr. Şimşek further said, “What have been accomplished in the last two years are [bringing] peace and [establishing] trust in the region. The region will develop, there will be a reverse migration. We must attract young people here from Western Turkey. This may seem a dream but it will come true.”