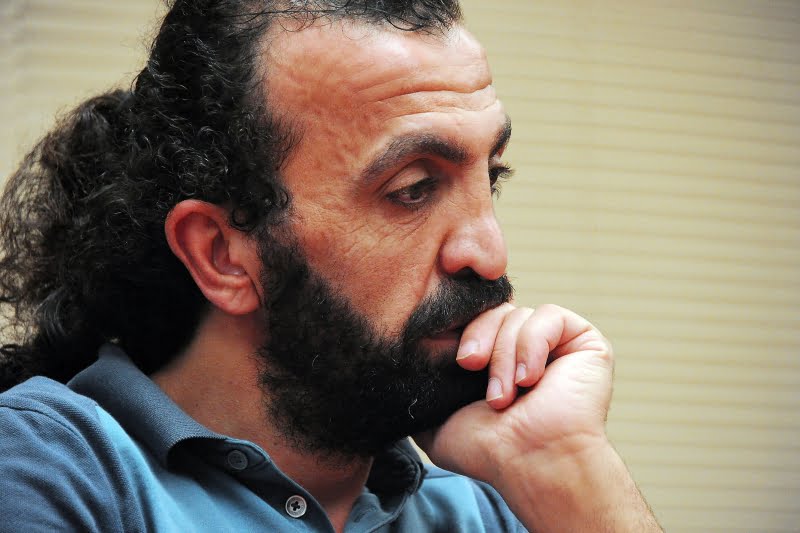 Cetin Gul, 37, from Istanbul, Turkey, who supports the cleric Fethullah Gulen, pauses for a moment while talking about the controversy involving Gulen since the failed coup in Turkey at the Turkish Cultural Center in Banksville. (Photo by Lake Fong/Post-Gazette)

Until this summer, Cetin Gul of Istanbul, Turkey, worked as a videographer for a company that did promotional work for clients that included a charity organization. That charity, Hizmet, is associated with the movement of Fethullah Gulen, a prominent Turkish Muslim leader living in self-imposed exile in Eastern Pennsylvania.

After a deadly and unsuccessful coup attempt by some in the Turkish military in July, the government blamed Mr. Gulen and began suppressing organizations associated with him.

Mr. Gul’s company closed, and he feared he would lose more than his job. Friends with government connections warned him he could soon end up in prison — as have tens of thousands of Mr. Gulen’s supporters.

“Because of the direct association with Hizmet, I was a direct target,” Mr. Gul said through a translator at the Turkish Cultural Center of Pittsburgh in Banksville.

Mr. Gul came to Pittsburgh in late summer on a tourist visa, leaving behind his new motorbike and most other possessions. Mr. Gul, a 37-year-old with a trimmed beard and long curly hair pulled back in a ponytail, is now trying to figure out his next steps.

He and about two-dozen other Turkish citizens have fled to the Pittsburgh area since July in fear of post-coup reprisals, some coming with their families, according to those helping them here. Throughout the United States and other countries, members of the Turkish diaspora are taking in people who have fled the country. Many are in America on tourist visas, giving them some breathing room as they consider whether to apply for asylum or to find a willing employer who would support a work-visa application.

Three men who fled Turkey spoke with a reporter at the Turkish Cultural Center of Pittsburgh, which runs regular cultural programs and is part of a network of centers around the country that are associated with the Gulen movement and staffed by its supporters. The other two men who recently arrived here asked not to be named for fear of reprisals against family members still in Turkey.

“All have come with only one suitcase and not much money,” said Bedrettin Tokgoz, executive director of the cultural center. “We are only expecting God’s grace to help us out of this situation.”

Turkey accuses Mr. Gulen, 75, who has lived in the Poconos since 1999, and his supporters within the military of fomenting the coup. The U.S. State Department says it is evaluating Turkey’s request for extradition.

Mr. Gulen strenuously denies involvement in the coup, as do his followers.

“If some people who appear to be sympathizers of Hizmet were involved in the treacherous coup attempt, they betray my ideals and should face justice,” Mr. Gulen said in a statement.

Mr. Tokgoz said such involvement would be “against his teachings for the last 50 years.” He cited Mr. Gulen’s proclamations on behalf of peace, social service and interfaith tolerance.

“It is impossible for us, his followers, to have committed this. It would negate us,” Mr. Tokgoz said.

The coup attempt, and the street battles that accompanied it, left more than 270 dead, according to The Associated Press. The government of Turkish President Recep Tayyip Erdogan has extended a state of emergency and targeted Mr. Gulen’s followers by arresting more than 30,000 people and having tens of thousands fired from government, police, educational and other jobs, the AP reported. The group Human Rights Watch says more than 2,000 judges and prosecutors alone have been purged and that journalists are also targeted.

Even some scholars who do suspect Mr. Gulen’s supporters within the military of the coup plot contend that Mr. Erdogan is now overreaching in his vast crackdown on anyone associated with the movement.

“This is insane, really,” one Turkish man in his 50s said last month during his stay in Pittsburgh. He said he’s not even a Gulen follower, but he lost his job at a government-related agency for the sole reason, he believes, that his son was attending a Gulen-affiliated school. He has since left Pittsburgh for a job opportunity in the Netherlands.

Mr. Erdogan — who has brought an Islamic-political blend into what has been Turkey’s century-long tradition of a secular state — and Mr. Gulen were once seen as allies. But a rift between them grew wider amid various developments, including government corruption investigations that Mr. Erdogan contends were politically motivated attacks on his allies by Gulen-affiliated prosecutors. Each accuses the other of using stealth means to amass power and subvert Turkish democracy.

Mr. Gulen has spoken and published often on interfaith cooperation and tolerance.

Critics contend that his movement placed its many followers in positions of influence throughout the Turkish government, military, police and educational establishments, with the long-term aim of greater control over the state.

Mr. Gulen’s followers have created organizations all over the world. The Turkish Cultural Center of Pittsburgh is operated by local Turkish Americans, as are similar cultural centers in other cities. Its members are mostly Hizmet sympathizers and promote events and public talks aimed at promoting greater intercultural understanding and awareness of Turkish heritage. Another Hizmet-inspired organization, the Peace Islands Institute, also has stated aims of promoting peacemaking and mutual respect and problem solving.

Also, a global network of schools linked to or inspired by Mr. Gulen include tax-funded charter schools in the United States, including Allegheny County and elsewhere in Pennsylvania. Some of the schools have been criticized in reports in past years by the Philadelphia Inquirer and CBS’s “60 Minutes” for practices related to finances, employment, education and immigration. Supporters say the schools bring strong science programs and other offerings to children whose families otherwise couldn’t afford such instruction.

Those involved with the Turkish Cultural Center said the center is not affiliated with such schools.

Mr. Tokgoz said local Turks feel obligated to help those who have fled for fear of imprisonment to start new lives here, either temporarily or permanently.

One 40-year-old man, who didn’t want to give his name for concern for his family in Turkey, said he has accepted his new circumstances.

“God makes every human being get accustomed to all situations no matter what,” said the man, who worked as a singer and teacher of religious songs to children, frequently on television.

He said his connection to Hizmet marked him for likely arrest by the government. When he got off the plane in the United States, he said sensed God telling him, “This is going to be a new life for you, so be prepared for what’s to come.”

He hopes to bring the rest of his family over and live “in America where people are respected and there is freedom.”