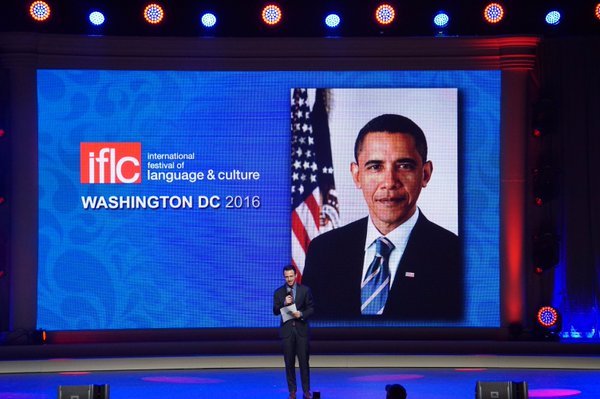 US President Obama sends a message to Gulen-inspired “The International Festival of Language and Culture” that took place in Washington DC at the DAR Constitution Hall, Washington DC’s largest Concert Hall on April, 2018, 2016. The hall that has a seating capacity of 3700 witnessed a historic evening as 125 young people from some 25 countries represented their countries with music and dance performances.

This festival, according to its website, is the largest and most prominent organization for promoting world languages and cultures and is dedicated to cultivate and educate the youth and create a platform to share their cultural heritage with their peers around the world. President Obama in his message said, “… festivals like this one allow us to bear witness to the ways hope and beauty stem from songs of inclusion.” Mr. Obama’s message was read by his special representative. Below is full text of his message.

The rich cultures and unique histories of our global society are brought to life through mesmerizing dance and captivating performance. In demonstrating the traditions that make your heritages special, festivals like this one allow us to bear witness to the ways hope and beauty stem from songs of inclusion. Your efforts to unite young people from across the globe reflect the power our common humanity has to transcend what sets us apart.

As you come together to celebrate the cultural mosaic that is our world and forge bonds of friendship, I wish you all the best.