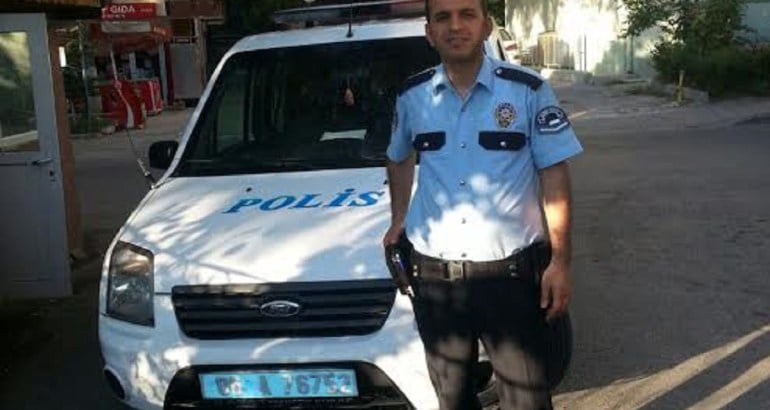 Türk was sent to Cebeci police station in Ankara on the night of the coup attempt where he rendered two army tanks inoperable along with his colleagues. He almost suffered a run-over by one of the tanks amid the clashes, according to a Stockholm Center for Freedom (SCF) report.

Only three days after the coup attempt, Türk was suspended from his post as part of an investigation into the Gulen movement, which the government accuses of masterminding the coup attempt.

In the face of his dismissal on Sept 1, 2016, however, he started to having blood in his stool and urine due to what doctors say caused by the stress.

As he was stripped of a health coverage after dismissal, his wife sold his gold wedding ring to cover the expenses.

When Türk was ultimately hospitalized, police stopped by to detain him despite doctors’ recommendation for inpatient treatment, on Apr 10. A subsequent court order sent him to Ankara’s Sincan prison.

“In prison, he suffered from an emergency health problem and was rushed to the Numune Hospital in Ankara on April 13, 2017. He stayed in the bed unconscious for four days. Doctors recommended a surgery to treat him and said his colons must be removed. Despite his serious health troubles, authorities have not released him from pre-trial detention. His wife, Emine Türk, who was notified about her husband’s hospitalization a week later was refused permission to accompany him at the hospital,” SCF said.