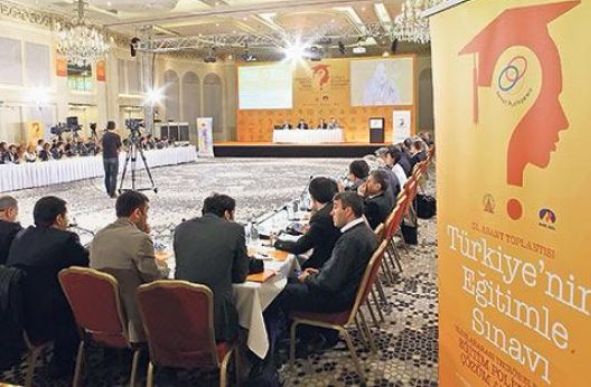 Tens of educators, bureaucrats and representatives of civil society organizations and private education foundations from Turkey and 15 other countries, who came together as part of the Abant Platform’s 31st meeting in İstanbul, have said the Turkish education system should not only focus on transferring information but also on improving students’ functional skills and capabilities.

The Abant Platform, organized by the Journalists and Writers Foundation (GYV), held its 31st meeting, titled “Turkey’s Educational Challenges: Educational Policy and the Search for Solutions,” at the Conrad Hotel in İstanbul from Feb. 22-23.

Educators, bureaucrats, civil society organizations and private educational foundations from Turkey and 15 other countries, including Australia, Japan, Germany, South Korea, Nigeria and Brazil, were among those attending the meeting.

At the end of the meeting, the Abant Platform released a final declaration in which it proposed several suggestions to resolve the problems of the Turkish education system.

Another suggestion was about the educational curriculum. According to the platform’s members, a centralist, homogeneous curriculum is one of the basic problems of the Turkish education system. The members suggested that curricula should be more free, flexible and pluralist. “The three main targets of education, acquiring competence, intergenerational transfer of values and revealing the potential skills of students, should be applied equally. None of them should be concentrated on exclusively,” they added.

Stating that the most important element of high-quality education is the professional competence of teachers and their commitment to the profession, the platform suggested that coordination between higher education institutions that train teachers and the Education Ministry should be improved, as the lack of coordination between these two negatively affect the performance and motivation of teachers.

The meeting kicked off on Saturday. The opening speech of the meeting was made by GYV President Mustafa Yeşil, who pointed out the importance of education for a country. He said that education is without doubt the most important issue for any society, adding that every other issue relates to it in some way.

Listing some of the problems in the Turkish education system, Yeşil said the legitimate complaints of teachers and those wanting to be teachers are awaiting a positive response. “Textbooks are another urgent matter; the compatibility of their content is a major concern in terms of the pluralist societies of today, and the attitude towards minorities. Our lack of success in foreign-language education openly contradicts the targets of the country as proclaimed by the authorities. The provision of education for special needs students is of equal importance,” Yeşil added.

Professor Eser Karakaş from İstanbul’s Bahçeşehir University was the first speaker in the first session on Saturday. He harshly criticized the educational curriculum of Turkey, stating that this curriculum is based on unrealizable and irrational objectives. “When we look at the curriculum of high schools in Turkey, we have come up with a very difficult curriculum. For example, there is even a class titled ‘information theory’ in the high school curriculum. We experience difficulty in finding students to take this course even at university. Actually, I wonder how this course is given at high schools and who gives this lesson. We have to set up more reasonable objectives when preparing a curriculum. Another issue that I want to touch on is the lack of importance given to postgraduate education in Turkey. A great amount of money is allocated for bachelor’s degree education in Turkey, but postgraduate education is neglected in the country. Postgraduate education should be encouraged more in Turkey, to have more a sophisticated generation,” Karakaş said.

Also highlighting the importance of dershanes, Professor Ludwig Haag from Germany said dershanes guarantee equality of opportunity in the education system. Stating that 1.5 million students benefit from dershanes in Germany, Haag said the number of dershanes across the world has been increasing every year.

Associate Professor İlhan Dülger from Middle East Technical University (ODTÜ) said dershanes will be an inseparable part of the Turkish education system until the Student Selection and Placement Center (ÖSYM) stops asking questions outside of school curricula in public examinations and stops using multiple choice questions in those exams. Ülgen also said the need for dershanes will continue to exist unless the difference in quality between schools across Turkey is completely resolved.

The Turkish government introduced a controversial draft bill seeking to close down the dershanes in October of 2013. The parliamentary Education Commission approved the bill on Sunday after it had been sent to the General Assembly.