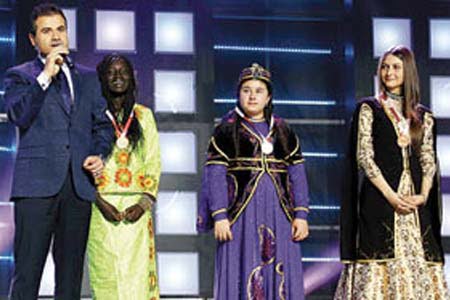 The 11th International Turkish Language Olympiad, which brings together hundreds of foreign students each year from Turkish schools established around the world, is organized by the International Turkish Education Association (TÜRKÇEDER). It is a festival that celebrates the Turkish language and which this year brought together 2,000 students from 140 countries. This year the Olympiad began on June 1 with a grand ceremony in Ankara and will end on June 16 with a closing ceremony to be held at Atatürk Olimpiyat Stadium in İstanbul. There have been also various stage shows performed by the Olympiad students in 55 cities of Turkey during the event.

The poetry final of 11th Turkish Olympiads took place at the Ankara Arena Sports Hall on Saturday night and thousands of people, including senior officials, politicians and high-profile guests from the world of the media and arts, were in attendance. Diokhane from Senegal, who recited a poem titled “Zindandan Mehmed’e Mektup” (A letter from prison to Mehmet) by famous Turkish poet Necip Fazıl Kısakürek, received the highest scores from the jury members in the contest and was named the winner of the poetry final of the Olympiads. Azerbaijan’s Türkan Memmedova, who recited a poem titled “Birazdan Gün Doğacak” (A new day will rise soon) by Turkish poet Erdem Beyazıt, came second, while Georgian student Natali Todadze came third by reciting a Turkish poem titled “Yağmur Musikisi” (Rain Music) by well-respected Turkish Scholar Fethullah Gülen.

Youth and Sports Minister Suat Kılıç, who was among attendees of the event, expressed his gratitude and admirations to the teachers who leave their homeland and go to many countries across the world to teach the students at Turkish schools. He also saluted Gülen for all his contributions to the organization of the Turkish language Olympiads.

The singing final of the Olympiads was held at İstanbul Sinan Erdem Sports Hall on Friday night. Thousands of people attended the final and the foreign students fascinated thousands of spectators with their performances. Yordanov from Bulgaria won the 11th International Turkish Language Olympiad’s most prestigious medal for singing on Friday night before a crowd of tens of thousands in İstanbul, beating 14 competitors from various countries.

The Bulgarian student delighted jury members with the song “Deli Gönlüm” (My Mad Heart) and received his award from Turkish pop diva Ajda Pekkan, who was also a jury member of the contest.

Yordanov then performed the winning song once again to a cheering audience. Azerbaijan’s Ayhan Bunyadzade came second, while Guinevere Camacho from the Philippines came third.

Among the nearly 20,000 attendees of the Friday event were a number of well-known figures from politics, the arts, business, media and sports. Economy Minister Mehmet Şimşek said that Turkish is the language of love, peace and brotherhood. “Now, students from 140 countries are able to interact with each other in the Turkish language, they are able to talk about peace, love and brotherhood in Turkish. We watched a great show tonight. These Olympiads being held each year are great examples of success,” Şimşek noted.