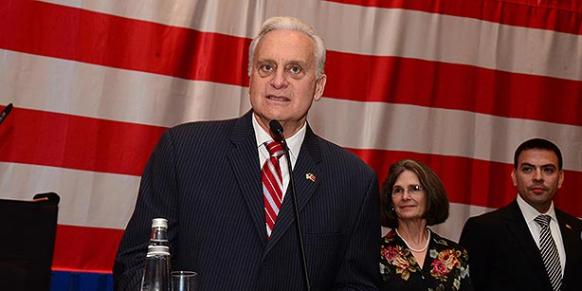 Former US Ambassador to Turkey Francis Ricciardone attends an event in the southern province of Adana in this June 2014 file photo. (Photo: DHA)

Speaking at a forum in Washington, D.C., on Wednesday organized by a think tank called the Transatlantic Academy, Ambassador Ricciardone, who left Turkey only a few months ago, said that ruling Justice and Development Party (AK Party) government officials so far had not come up with tangible evidence against the Hizmet movement, and stressed that the US government does not see members of the movement as terrorists. “High officials would come to me and complain about [Islamic scholar Fethullah] Gülen. I would say, show me any evidence of crimes in your law or in ours. Are you suggesting any violence anywhere, any violent crime or another crime? Money laundering, people trafficking, visa problems, anything? They [the Turkish government] certainly never suggest [any crime]. Nobody from the Turkish state, in an official conversation with me, ever suggested there was violence there [the Hizmet movement],” he added.

“The US government does not regard the Hizmet movement as violent terrorists. Period,” Ricciardone underscored.

Ricciardone has been working as the vice president and director of the Atlantic Council’s Rafik Hariri Center for the Middle East since September of last year. Following revelations of a graft probe on Dec. 17, 2013 that implicated some members of the AK Party, then-Prime Minister and now President Recep Tayyip Erdoğan threatened to expel Ricciardone, accusing the US of being behind a foreign plot against Turkey.

Ricciardone said Turkish government officials are really concerned about the threat the Gülen movement poses to national security. He pointed out that the US government will take these concerns about the movement seriously, but it’s still hard for the US “intellectually to see how a movement, a religious movement that the US respects as doing good things for Turkish-American relations,” both in the US and Turkey is a threat. “How could that be a threat to the state?” Ricciardone asked.

Stressing that the Turkish government describes the movement as “a state within a state”, Ricciardone said: “Alright, but where is the crime? In your terms or in our terms. You are the government of Turkey, we respect you and take you seriously; we see how politically this could be a worrisome thing. It would be worrisome in our country if a particular group that is not a political party, is not overtly running for office and getting elected, were to penetrate the state, it would make a lot of Americans angry and upset. But, we don’t see a crime here.” Ricciardone added that Turkish government has been frustrated with the US due to this dispute over what the Turkish government sees as a national security problem.

Ambassador Ricciardone also said that when he was serving in Ankara, his doors were always open to visitors from the Hizmet movement, adding that his meetings with people who are law abiding citizens were no secret. “Are you saying that these Turkish citizens are criminals that should not be coming to my country or my home? No? Then we are going to keep seeing them,” he added.

After the eruption of a graft scandal on Dec. 17, 2013, Erdoğan implied that Turkey could expel the US ambassador to Turkey for alleged remarks regarding the police operation investigating corruption and bribery. According to a report that appeared in four pro-government dailies, then-US Ambassador to Turkey Ricciardone told EU ambassadors at a meeting in Ankara on Dec. 17, 2013 that they are about to witness the collapse of an empire [Turkey]. The US Embassy issued a statement after the claims appeared in the dailies, denouncing them as complete lies and slander.

During his speech on Wednesday, Ricciardone stressed that Turkey and the US have “shared interests,” rather than “shared values,” pointing to negative developments in Turkey with regard to freedom of expression.

Adding that there are people close to Erdoğan who say that there is no need for “checks and balances” Ricciardone said, “There really are different values in that administration from the values that we have.”

He also said that he is concerned about pro-government media trying to convince Turkish people that the West is an enemy and the US is the leader.

Ricciardone also underscored the importance of impartiality and independence of the judiciary in Turkey. “At the end of the day, judges need to be accountable not to a cult, not to a secretive group, but to the law,” he said.

US will work with anyone, including military

When asked why the US administration did not show a strong reaction against the Turkish government’s crackdown on media some media outlets on Dec. 14 of last year, Ricciardone said sometimes the US opts not to condemn certain acts, but does make recommendations. Noting that Turkey is an important country in the region, Ricciardone said that Turkey and the US are “kind of stuck with each other,” and that the US would like to have a reasonable relationship with whoever governs Turkey, including military generals.

“We need to be realistic about how we influence other countries’ public opinions and state decisions. Sometimes naming, shaming and strident condemnation are unavoidable. You’ve got to do it. Other times, you go by different ways, trying to stay engaged with people when you can. Being straightforward about our values and our purposes all the time, as we must,” he said.