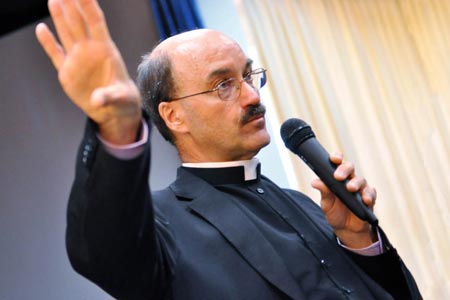 In the view of doomsday reports from the US, it does not come as a surprise how ordinary Americans from all faiths, Christianity, Judaism and Islam, have worked meticulously to bridge the gap and sheer absence of dialogue between these three Abrahamic religions especially in the context of post 9/11 world.

Leo D. Lefebure, a Catholic priest by training and Professor at Matteo Ricci Chair, Department of Theology at Georgetown University, who has been instrumental in this initiative, was in town to share his experience about his interaction with followers of Fethullah Gulen and his Hizmat movement in the US.

Lefebure recounted how in the post 9/11 days, different communities worked in co-ordination to deal with the fall-out and how it subsequently lead to a wider interaction between the communities that helped further in understanding each other’s belief in a positive environment.

But it was not always easy. Lefebure maintains that a trilateral dialogue in the United States was sort of impossible just a decade or so ago. While the Catholics and Muslims could talk in amicable environment and with a basic level of trust, and so do Catholics and Jewish theologians and clergy; any such dialogue between Muslims and Jews were either a non-starter or even if they started, it quickly turned into an emotional outburst mostly due to the boiling down of the Arab-Israel conflict. It was amidst this kind of negative environment that followers of Hizmet movement, popularly known as Gulen movement, stepped in. A completely different kind of approach, mixed with the genuine urge to invite people of all faiths for dialogue made Hizmet’s initiative popular in the states.

The frontal organization for such interaction in the United States was Rumi Forum. Hizmet movement takes Rumi’s teachings as one of its core theological ideas and interprets the world through such a constructive prism. Not for nothing the forums for inter-faith dialogues by Hizmet started seeing Jewish clergy presence too, something that was unthinkable just a few years ago.

“I have seen events that have previously been unseen in the states. Once a group of Whirling Darvesh came to our DC area and gave a presentation of their ideology. It struck a resonance with both Catholic and Jewish audiences. It was shortly followed by the performance by the same group in a synagogue. That, I was told, was the first time in history that Darvesh performed in a synagogue. Some months after that there was an Iftar organised in a synagogue. Another first,” recounts Lefebure.

It is interesting how these dialogues end up finding issues of mutual respect and understandings. Mother Mary, a figure revered both by Catholics and Muslims often acts as the bridge. There is an entire Surah of Quran on Mary and the very fact has thrilled several Catholics who were previously not aware of the fact. Similarly St. Francis of Assisi, a clergyman part of the Crusader Army, who dared to start a dialogue with the then Ottoman Sultan, becomes another such figure.