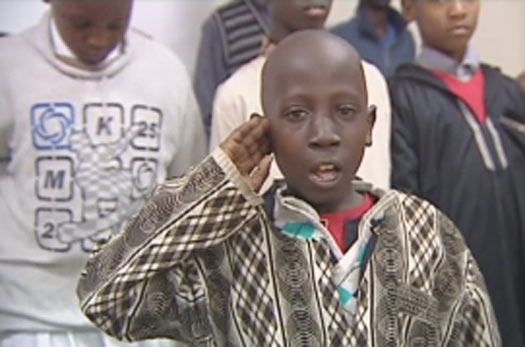 İftar was provided by KYK to the orphan students and their teachers of Noor Madrasah located in Kibera, one of the second biggest shanty neighborhoods in Nairobi. Ranging from 5 to 13 year-old a total of 50 orphan students receives education in Madrasah.

A teacher who works in the Noor Madrasah stated that they are grateful to KYK for its iftar invitation. “We pray for them may gates of paradise to be opened to the relief workers of KYK,” added instructor.

A relief worker, who coordinates the relief activities in the Kenya said that they provide iftar those who in need in different locations across Kenya. “In every each location we provide 100 and in total we provide fast braking meal for around 1200 or 1500 people across the country. Two of the locations where we supply iftar are orphanages. Sometimes also we supply Sahur meal. If we get more donations it means that we can help much more people. We would like to thank those who donated to Kenya,” noted relief worker.

Describing the fast breaking meal as a pleasant, an orphan studying in the 5th grade, also thanked those who invite them to iftar.
“I hope Allah (God) will include the inviters to paradise,” student noted.

The Turkish-operated Chindamanee, Siriwat, Wichai, Pan-Asia Schools in Thailand continue to wave the flag for Thailand in international arena. The schools’ students having ranked high in the recent international contests paid a visit to the Thai Minister of Education, Chaturon Chaisaeng, in his office. The students told the minister about the event following a promo […]