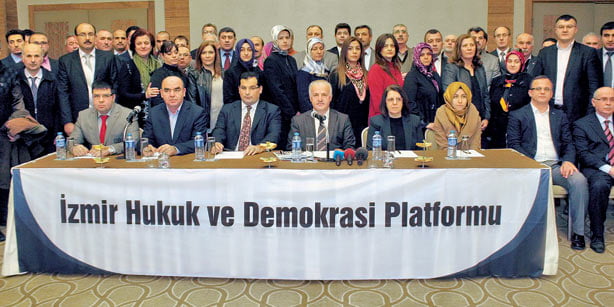 Various civil society organizations (CSOs) from the provinces of Aydın, İzmir and Ağrı held press conferences on Tuesday slamming an ongoing black propaganda campaign being conducted by the government against the Hizmet movement, which is inspired by Turkish Islamic scholar Fethullah Gülen, saying that top government officials should refrain from using hateful rhetoric.

Aytekin said the government’s recent attempts to increase censorship of the Internet, the pressure on the media, illegal wiretaps and the attempts to bring the judiciary under the authority of the executive will move Turkey away from being a democratic state of law.

The Aydın Democracy Platform encompassing 43 CSOs in Aydın province held a press conference on Tuesday in response to the baseless defamatory allegations directed at Gülen and the Hizmet movement by circles close to the government.

Speaking on behalf of the platform, spokesperson Şenol Tayfun said those who don’t obey the government are immediately labeled as traitors by top government officials, adding that it is ruthless to accuse the Hizmet movement of disturbing the peace even though it has been endeavoring to establish a peaceful environment in the country.

“Yes, there is a gang or ‘parallel state’ in the country but the target that the government has been presenting is wrong. With those unjust allegations, you [government officials] are breaking the hearts of many volunteers. You are sowing the seeds of hate in society by polarizing people with such baseless defamatory labels. We want government officials to stop using a language of war and adopt a language that will instead embrace every segment of society.”

Stating that the government has been depicting the Hizmet movement as a target in order to get the current corruption and bribery scandal — which has implicated former Cabinet ministers and other high-profile individuals since it was made public on Dec. 17 — off the country’s agenda, Tayfun said the same government officials had praised the activities of the Hizmet movement before the corruption scandal wherever they went, adding that the government immediately started labeling the same movement with baseless defamatory words such as “gang,” “Hashashin” — a shadowy historic group that carried out politically motivated assassinations during the time of the Seljuk Empire — and even “agent of US and Israel.”

Stating that such words cannot be used for the Hizmet movement, Tayfun said that the movement has millions of followers in Turkey and around the world.

Referring to Prime Minister Recep Tayyip Erdoğan, who during a recent Ambassadors’ Conference gave Turkish envoys the duty of discrediting Turkish schools in the countries where they were serving, Tayfun said: “I visited Turkish schools [overseas] many times. I had the opportunity to observe how devotedly Turkish teachers are working. Some teachers only eat once a day due to a lack of food. Now you are calling such people ‘hashashin.’ However, the real issue is corruption and bribery. The government, which has been trying to cover up its corruption, is making the Hizmet movement a target through some media outlets. It is the government which has been trying to block the graft investigation with arguments such as gangs or a parallel state.”

The Ağrı Young Businessmen’s Association (AGİAD) also held a press conference in the province on Tuesday to express its support for the Hizmet movement against the smear campaign targeting the movement.