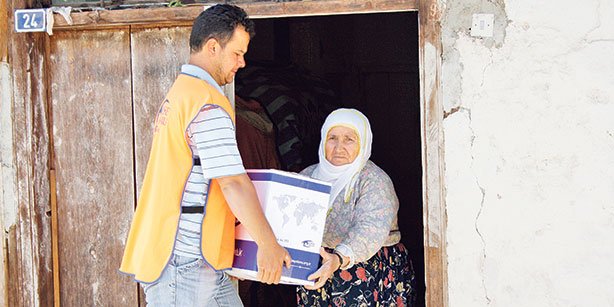 A member of Turkish charity association Kimse Yok Mu is seen giving a relief supply kit to a local in this file photo.(Photo: Cihan)

The charity also distributes Ramadan charity aid packages to 150,000 families, all of which are prepared by volunteers, while 10,000 children in need will be given clothes and shoes to help them enjoy the Eid festival, or Eid al-Fitr, this year.

Entering the international field with the tsunami that hit Indonesia in 2004 and the Pakistan earthquake in 2005, Kimse Yok Mu’s mission continued with humanitarian aid campaigns organized for the victims of disasters or war in Palestine-Lebanon, Peru, Bangladesh, Sudan-Darfur, Georgia-Ossetia, Myanmar, China, Gaza and Haiti. The association has also reached out to people from 113 countries to distribute Turkish people’s charity during Ramadan, Eid al-Fitr and Eid al-Adha (Feast of the Sacrifice). Since being founded in 2004, Kimse Yok Mu has been accelerated its branching and networking efforts. Starting with offices in the larger cities of Turkey, the association now has branches in 31 Turkish cities, a number expected to increase in the near future.

Speaking to Sunday’s Zaman, Kimse Yok Mu Deputy Chairman Hüseyin Fazlıoğlu said the charity helped 136,000 families in 80 countries last year, from Bolivia to Cambodia and Bosnia Herzegovina to South Africa. He expects the charity to improve on those numbers by extending its assistance to even more people this year, with more than 220,000 registered volunteers assisting the charity’s global operations.

Among the charity’s ongoing aid campaigns, Kimse Yok Mu is helping more than 62,000 orphans by constructing some 30 orphanages in 52 countries across the world, such as Sudan and Burundi. The charity has also constructed schools for the children of Syrian refugees in the Kilis and Yayladağı refugee camps.

According to Fazlıoğlu, more than 5 million people in 19 countries, especially in Africa, will drink clean water from 2,374 wells drilled by Kimse Yok Mu. The charity has also performed cataract operations on 34,607 people since 2008 and plans to extend that to 60,000 by the end of 2015.

As part of an agreement with the African Union (AU) in April, the Turkish charity aims to build 1,000 schools in African countries with its “Sahara Schools” project by 2020, paving the way for close cooperation between the two entities to further aid, education and development efforts in Africa.

The charity is the largest volunteer and global aid organization based in Turkey, and is the only aid organization that holds UN Economic and Social Council (ECOSOC) special consultative status. In 2013, it developed internationally recognized relief programs in partnership with the UN Human Rights Council (UNHCR). That same year, the charity was also granted the Turkish Parliament Outstanding Service Award under Justice and Development Party (AK Party) rule.

Despite that parliamentary award, Kimse Yok Mu has been targeted by the AK Party’s ongoing hate campaign against the Gülen movement — popularly known as the Hizmet movement — one of the largest faith-based communities in Turkey after a major graft probe came to light on Dec. 17, 2013, implicating people from the inner circle of the AK Party and President Recep Tayyip Erdoğan. Erdoğan and AK Party figures accuse sympathizers of the Gülen movement, especially those in the police force and the judiciary, of trying to overthrow the government by launching the graft probe, despite having no evidence to support their accusations. The Hizmet movement, whose supporters are inspired by the views of Turkish Islamic scholar Fethullah Gülen, has rejected all the accusations.

After Dec. 17, Erdoğan and the AK Party government started a smear campaign against institutions close to the Gülen movement, such as media organizations, schools, universities, civil society organizations and charities such as Kimse Yok Mu. Using state institutions as a tool in the smear campaign, the government unlawfully limited the activities of these institutions and used the strongly pro-government media to fabricate stories portraying the Gülen movement as a terrorist group.

Last year, inspectors assigned by the Interior Ministry closely audited the activities of Kimse Yok Mu and a report prepared by the inspectors in October 2014 stated that not a single flaw had been discovered in the organization’s activities. Despite the clean bill of health given that month, a Cabinet decision still removed Kimse Yok Mu’s right to collect donations without obtaining permission from the relevant authorities.

A month later, in November 2014, the Council of State issued a stay of execution on the Cabinet decision to rescind Kimse Yok Mu’s right to collect charitable donations, saying that the decision was against the law. Since then, despite the court order, the charity’s activities have continued to be hampered by state offices such as the İstanbul Governor’s Office, directorates and banks.

This April, a shocking investigation against Kimse Yok Mu came to light after Ankara Chief Public Prosecutor Musa Yücel sent a subpoena to Kimse Yok Mu’s management asking the charity to send him information about the organization’s activities for Eid al-Adha (the Feast of the Sacrifice) in 2011. When the charity’s lawyers went to the Ankara Courthouse on April 16, they found that the investigation included charges of being an “armed terrorist organization.” However, because the Ankara 4th Penal Court of Peace had ordered that the details of the investigation remain confidential the lawyers could not examine the content of the investigation file.

İsmail Cingöz, the chairman of the charity, told Sunday’s Zaman that the decisions by the AK Party government, imposed on state institutions, media and the judiciary, against Kimse Yok Mu restrict the charity from announcing Ramadan aid activities more broadly to the public. Despite all the restrictions, Cingöz said the charity’s volunteers still managed to spread awareness of Ramadan aid activities via social media and continue to reach people in need.

Emphasizing that government restrictions will not prevent them from doing their duty, Cingöz said donations can be sent to the association’s bank accounts as a remittance or made by credit card on the charity’s website (http://kimseyokmu.org.tr/?lang=en).