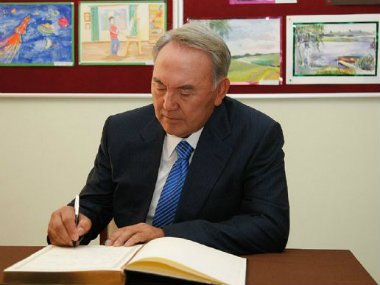 Kazakh Ambassador Canseyit Tüymebayev thanked the businessmen who invested in his country and the educators who opened schools in Kazakhstan despite the risks right after the nation declared its independence 20 years ago. Tüymebayev presented medals to Harun Tokak and Ali Tokul among others.

Turks who have contributed to Turkish-Kazakh relations were presented medals at a reception organized by the Kazakh Consulate General in İstanbul on Thursday evening.

At the reception hosted by Kazakh Consul General Askar Shokybayev to mark the occasion of the 20th anniversary of Kazakhstan’s independence, dozens of Turkish businessmen, academics, educators and representatives of civil society organizations received medals for their contributions to improving friendship and cooperation between Turkey and Kazakhstan.

Speaking at the event, Kazakh Ambassador Canseyit Tüymebayev said his people have not forgotten the sacrifice of the Turkish people during the years when Kazakhstan was struggling for its independence. He thanked the businessmen who invested in his country and the educators who opened schools in Kazakhstan despite the risks right after the nation declared its independence 20 years ago. Tüymebayev presented medals to Harun Tokak, Dialogue Eurasia Platform (DA) co-chair and author; Ali Tokul, the former Kazakh-Turkish Educational Foundation (KATEV) chairman who opened the first Turkish school in Kazakhstan in 1992; and businessman Bekir Okan along with dozens of others.

In an interview with the Cihan news agency, Tüymebayev said he is happy to be with Turkish businessmen, educators and artists in the megacity of İstanbul. Tokak said Kazakhstan had developed a lot following the declaration of independence, and added that Kazakh President Nursultan Nazarbayev has a big role in his country’s development.

In late November, another ceremony was hosted by Tüymebayev in Ankara, where certificates of honor were presented to Justice and Development Party (AK Party) Deputy Chairman Hüseyin Çelik; Parliamentary Speaker Cemil Çiçek; Abdülhamit Bilici, the general manager of the Cihan news agency and a Zaman and Today’s Zaman columnist; and Zaman Editor-in-Chief Ekrem Dumanlı for their contribution to the development of bilateral relations.