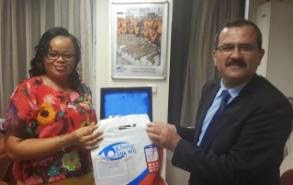 A delegation from Cameroon, including Prime Minister Philemong Yang’s wife, were in the Turkish province Bursa, in order to share experiences of Kimse Yok Mu (KYM) for their future projects. The delegation had meetings with KYM officials, as a part of a newly founded charitable foundation in Cameroon. They seek benefiting from KYM’s experiences and using them in their charity work. They were pleased with the warm reception and KYM Bursa director Sadullah Hizan’s presentation on the foundation’s work.

PM’s wife Linda Yang said they intend to follow KYM’s footsteps. “We see that you’re perfectly practicing what you just told us about. Your volunteers are amazing. They are working expecting nothing in return,” Yang said. She additionally thanked Bursa people for donating for the 16 water wells that were made available in Cameroon during the last Eid al-Adha. The delegation invited the KYM officials to Cameroon and demanded orphanages and fountains for their country.

Their next stop will be Istanbul where they will make several visits and attend particular events before their departure.