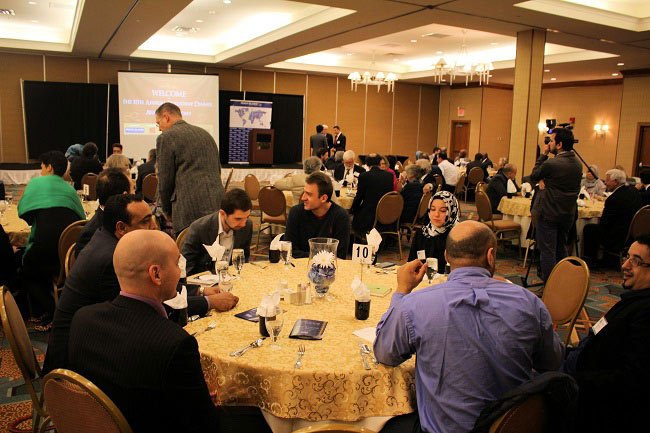 “Reserve in your heart a seat for all”, a memorable quote by Fethullah Gulen, a Turkish civic activist and the Peace Island Institute’s Honorary President, could have been the slogan for the evening. The Peace Island Institute (PII) branch for Upstate New York in Rochester was celebrating its 11th Annual Friendship Dinner with Award Ceremony at the Double Tree Hilton in Henrietta last Wednesday.

The Peace Island Institute and its co-host for the event, the Rochester Turkish Cultural Center (TCC), are non-profit organizations with the declared goal to support and celebrate cultural variety and peace and understanding among different cultures, traditions and religions.

Bulent Özdemir, the Executive Director of the local PII branch, opened the event by welcoming everybody and introducing the Master of Ceremony for the evening.

Don Alhart, News Anchor and Assiociate News Director for Channel 13. After giving an overview of the agenda for the evening, Don Alhart introduced some of the public servants, among them; Mr. Bill Hochul, US Attorney, John Howlan, 13th District County legislator, Judge Karen Morris, City Councilman, many Community Leaders as well as Religious Leaders.

Following Don Alhart’s opening words and dinner, Mahir Zeynalov, Journalist and Correspondent for the popular Turkish newspaper Today’s Zaman, presented the keynote speech for the event covering many subjects related to the freedom of press in today’s Turkey and all around the World. His open words about the general situation in his homeland, which he had to leave because of being prosecuted for openly reporting about the government’s involvement in corruptive activities, was honored with a standing ovation by the touched audience.

The award ceremony was again initiated by Bulent Ozdemir, who brought Sandra Frankel (Advisory Board Member for TCCR) and David Phelps (Commander in the Monroe County Sheriff’s office) to the podium who introduced this year’s Award winners.

David Phelps presented Dr. Don Kamin and James Lawrence with the PII 2015 awards for Public Safety and Media. Dr. Kamin was honored with the Award for Public Safety acknowledging his work in the mental health system including development of the Crisis Intervention Team in the Rochester area in cooperation with different law enforcement agencies.

Jim Lawrence received the PII 2015 Media Award for his almost 20 years of outstanding work as local journalist being the eyes, ears, voice and conscience for population and administration in Rochester.

As President of the University of Rochester, Joel Seligman is not only improving the provided scholastic offers in Rochester but is also involved in many projects to enhance local lifestyle and economy.

Ex-Rochester Mayor and Lt. Governer for New York, Robert Duffy, was honored for his almost 40 years of public service in Rochester and the State of New York.

This year PII presented a Special Recognition Award to Dr. Hidayet Karaca, CEO of Samanyolu Broadcasting Group International for his outstanding dedication to Media and Responsible Journalism. Since he has been detained because of his supported statements of Freedom of Press and Democracy in Turkey, Mr. Mustafa Taban, Correspondent to Samanyolu Group, NY received the award on the behalf of him.

The evening was rounded off by the remarks from the Program Committe Members thanking everybody spending the evening with the Upstate New York Branch of the Peace Islands Institute and the Rochester Turkish Cultural Center.

Overall, the successful event left us with an insight into the vision and goal of two amazing originations, the desire to learn and experience different cultures, traditions and religions and an appreciation about the lifestyle, freedom and opportunities provided by our great country.