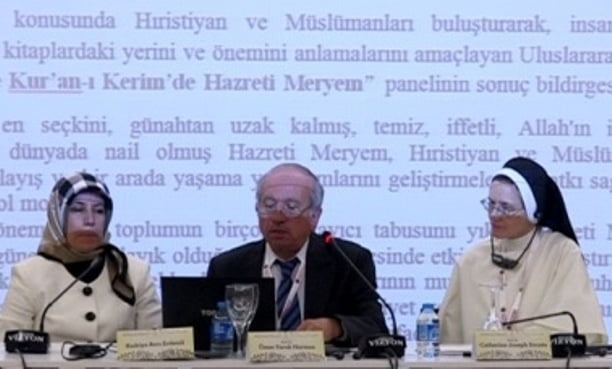 The concluding statement of the International Panel on Mary in the Holy Scripture and Qur’an, which sought to bring Christians and Muslims together to discuss Mary and help people understand the place and significance of Mary in holy books, is as follows:

1- Mary was the most distinguished, innocent, pristine, and chaste of all women and she attained God’s favor and benevolence before she died. As such, he represents a significant role model for Christians and Muslims to develop a mutual understanding and foster coexistence.

2- Having destroyed many exclusionary taboos of her time, Mary played an effective role in the empowerment of women.

3- We have much to inspire from Mary as an epitome of patience, humility, submission, devotion and belief for treating spiritual crises and diseases that haunt humanity in general and women in particular.

4- It is quite natural that both Christian and Islamic sources have a good level convergence as well as divergence about Mary. However, it is clear that it would be more advisable to focus on common grounds rather than differences and accept everyone as they are.

5- Given the fact that it is a must to have a thorough understanding of Mary, an epoch-making woman, both from a socio-cultural and theological perspective, it is recommended that the panel on “Mary in the Holy Scripture and Qur’an” should be regularly held with differing themes every year.