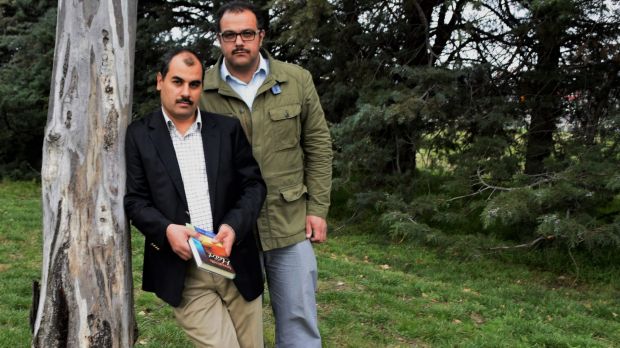 Fethullah Erdogan, left, is the director of Canberra's Bluestar Intercultural Centre, a Muslim outreach organisation established here in 2009. He and his colleague, Muhammed Aksu, right, work to encourage interaction between the Muslim and wider community. Photo: David Ellery

The father of two, who moved to the ACT in 2009 with his wife, Handan, and their sons, to head the Bluestar Intercultural Centre, is committed to peace, building bridges between the Muslim community and other religions and cultures and is an outspoken critic of groups such as Isis and al-Qaeda.

“No [true] Muslim can be a terrorist and no terrorist can be a Muslim,” he has told Fairfax in previous interviews.

Over the past six years the Erdogan family’s south Canberra home has been visited by many prominent politicians and high-ranking ACT religious leaders.

But, as a committed follower of Fethullah Gulen, the 75-year-old founder of the Hizmet [service] movement, Mr Erdogan has been branded a terrorist by the Turkish government in the wake of the failed coup attempt on July 15.

Despite having recently become an Australian citizen, Mr Erdogan fears if he returned to Turkey at the moment he would be arrested as soon as he stepped off the plane.

He has friends in Turkey who have been stripped of their livelihoods and forced to go into hiding as President Recep Tayyip Erdogan cracks down on “enemies of the state”.

In the wake of the coup attempt Australia’s Turkish embassy and consulates issued statements labelling Gulen and his followers terrorists and claiming that “the Fetullah Terrorist Organisation” was “a threat to all governments and humanity in the countries [in which] they operate, not just for Turkey”.

These claims have been disputed by independent observers, with Graham Fuller, a former vice chairman of the Central Intelligence Agency’s National Intelligence Council, writing: “It is unlikely Gulen was the mastermind behind the dramatic coup … Erdogan’s sensational and sweeping charges against Gulen seem to fly in the face of most logic … Erdogan had already largely crushed Hizmet before the coup”.

This had been in response to the publication by Gulen followers of police wire taps detailing corruption at the highest levels of Erdogan’s government in 2013.

Greg Barton, a counter terrorism expert at Deakin University in Victoria and an Australian expert on Gulen and Hizmet, told the ABC both were being used as scapegoats by President Erdogan to tighten his grip on power.

“This [the crackdown on Hizmet] is really a smokescreen for a much bigger operation,” Mr Barton said. “He’s [Erdogan] made no secret of his desire for executive presidential power. He didn’t have that yesterday; he has that today with emergency rule”.

Fettullah Erdogan said he couldn’t be sure Turkish government action against people who knew him in Turkey was the result of that association but he couldn’t rule it out either.

“Someone may have no direct association with Hizmet; it doesn’t matter. All it takes is a single accusation. The security forces are seizing copies of books by Gulen from homes and displaying them as `evidence’ of terrorism as if they were guns or bombs,” he said.

Australian-born Muhammed Aksu, a former school teacher from Wollongong who now works at Bluestar in Canberra, said the claim Hizmet was a terrorist organisation was ridiculous.

“We operate in 140 countries around the world, we are centred on education, we are never involved in illegal activity and everything we try to do is a positive,” he said.

“What is happening in Turkey right now is like what happened in the McCarthy era in America or in Hitler’s Germany.”