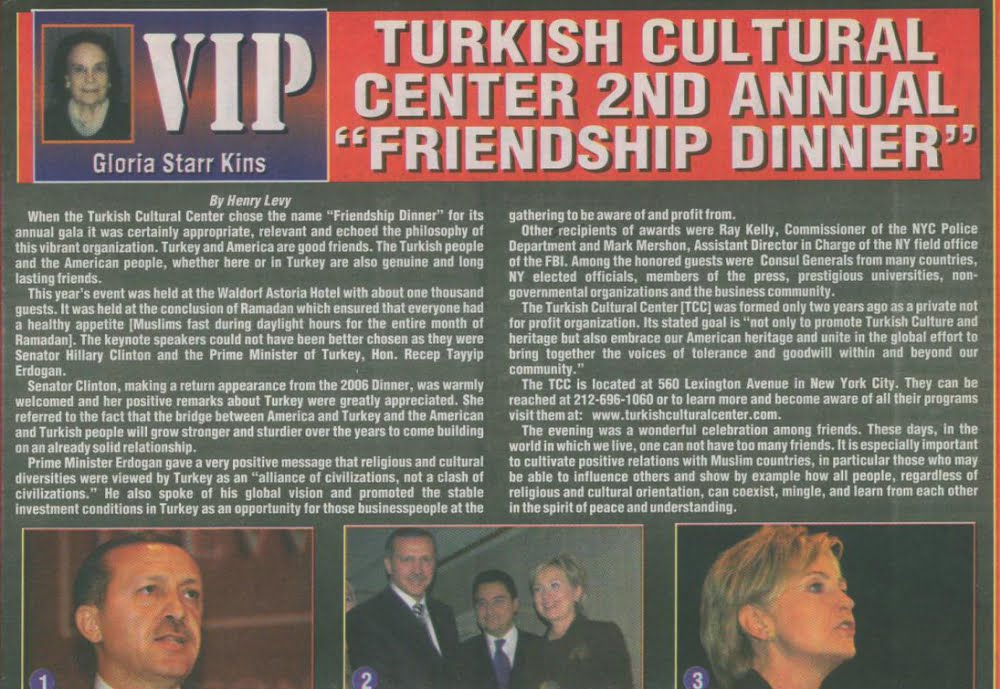 Would President Obama have accepted an invitation to speak at Osama bin Laden’s birthday party?

I ask because in 2013 [1] I heard Turkey’s president Erdoğan speak at a fancy Ramadan “Friendship Dinner” thrown by New York’s Turkish Cultural Center. The Center, a creation of the self-exiled cleric Fethullah Gülen, held this annual event for hundreds of guests of all faiths at the Waldorf Astoria ballroom. As usual, prominent Christian and Jewish clergy attended and lauded the organization’s moderate and ecumenical outlook.

Now, only three years later, Erdoğan accuses Gülen of heading a terrorist organization and engineering last month’s failed military coup. I wonder. If Erdoğan thought Gülen was a terrorist, why did he agree to speak at the Waldorf Astoria?

One, Gülen is such a clever terror leader that his secret objective of taking over the Turkish state was unknown to Erdoğan in 2013, even though his Hizmet organization had been economically and educationally active for over thirty years.

Two, Gülen’s thousands of followers, who are now being purged from their jobs and businesses throughout Turkey, had not yet become radicalized as terrorists.

And three, Erdoğan labeled Gülen’s followers terrorists only after the two men had a political falling out and Gülen’s people, though not Gülen himself, accused Erdoğan of seeking dictatorial control of Turkey.

The first possibility bespeaks an unprecedented level of plotting and secrecy. When in the 1990s Gülen’s devotees established hundreds of schools in the post-Soviet republics of Central Asia and elsewhere outside Turkey, did they know that their leader’s secret ambition was to take over their homeland?

Did they dream of a military coup while spending years teaching science and math—Islam is not normally part of the Gülen school curriculum—in Azerbaijan, Turkmenistan, Moldova, or Mongolia? Did they establish thousands of successful businesses within Turkey as part of their conspiracy? If so, why did the dozens of scholars who were drawn to study what appeared to be the very model of a moderate, ecumenical Muslim organization fail to find any speeches or writings betraying Gülen’s ultimate goal?

Erdoğan’s advocates maintain that moderation was a ruse, a cover for violent militancy. A cover so effective that up until the coup, the Gülenists were never identified with violent acts, unlike ISIS or al-Qaeda, or even the Muslim Brotherhood.

The second possibility, a massive radicalization of the Hizmet over the last two years, may fit with our current fear of European Muslims being radicalized, or “self-radicalizing,” through the Internet. But the jihadist sites and recruiters charged with carrying out ISIS radicalizations are not hard to find. They broadcast their murderous agenda in every way possible.

But there are no Gülenist sites devoted to overthrowing the Turkish state. Are we to believe, then, that every Gülen devotee running a school in Indonesia or Somalia or Texas suddenly received a secret missive stating their leader’s true goal and immediately responded by becoming a terrorist? Without any of them resisting the summons or publicizing such an outrageous incitement?

An Erdoğan supporter might argue that the terrorist conspiracy involved only a core element within the Hizmet. But Erdoğan is now implementing a purge of everyone in the Hizmet—jailing, firing, canceling passports, seizing businesses—and asking governments worldwide to declare all of Gülen’s devotees terrorists and shut down their schools and welfare organizations.

Since neither of these two possibilities seems at all likely, we are left with the possibility of a personal falling out between two Muslim leaders. More than a possibility. A manifest reality. Erdoğan says Gülen heads a coup-making terrorist organization. Gülen’s people say that Erdoğan is a corrupt would-be dictator who, along with his family and cronies, is stealing vast sums of money from the Turkish people.

Wherever the truth lies between these two positions, the idea that all Hizmet activists and institutions worldwide must be considered terrorists is preposterous. The coup is one thing. The purge another. Scores of thousands of Turks are losing their careers, their businesses, and their freedom and being branded with a label that stigmatizes their entire families.

Would Hitler have spoken at a May Day gala thrown by the German Communist Party in 1933? I think not. But I sat at the same table with Erdoğan at Gülen’s Waldorf Astoria gala in 2013.

HizmetNews thinks that the author made a typo in the date and made calculations accordingly. The dinner mentioned was held in 2007 to our knowledge.

Cross-cultural program between Jewish and Turkish Muslim teens flourishes in south Brooklyn as Israel, Turkey eye calm. The Young Peace Builders, which was launched three years ago by the Kings Bay Y, a Jewish community center, and the Amity School, a private K-12 school that admits students from all ethnic and religious backgrounds, serves a primarily Turkish-Muslim student body.