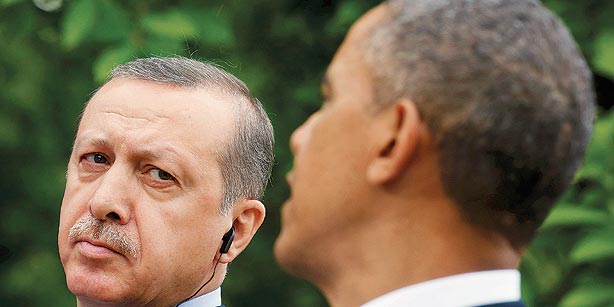 Erdoğan, speaking on the Turkish ATV program on Thursday, said that during a phone call with President Obama on Feb. 19, he had asked for Gülen to be extradited as a threat to Turkey’s national security. Erdoğan claimed that Obama had viewed this request “positively” and replied by saying, “I got the message.”

“The response attributed to President Obama with regard to Mr. Gülen is not accurate,” the White House said in an e-mailed statement to various press organizations, including Today’s Zaman, on Friday. The statement marks a first in Turkish-American relations as a denial of the Turkish prime minister’s version of events.

After a corruption and bribery investigation became public on Dec. 17 of last year, around 50 people were detained, the including sons of three ministers, businesspeople and bureaucrats, and allegations arose that several ministers were also implicated in the illegality. Shortly afterwards, Erdoğan reassigned the prosecutors and thousands of police officers, claiming that they were under the control of Gülen and trying to create a “state within a state.”

“In that February 19 call, the President noted the importance of sound policies rooted in the rule of law, as well as the importance of mutually respectful relations between our countries. Our commitment to working together with Turkey, particularly on a variety of regional issues of mutual interest, continues,” the White House statement continued.

A number of wiretaps uploaded to YouTube last week have implied that Erdoğan and his family were involved in the corruption scandal. Erdoğan has claimed that the wiretaps are doctored and accused Gülen supporters of being behind the recordings.

In his TV appearance on Thursday, Erdoğan said: “I discussed these issues [Gülen] with President Obama. I told him that the source of my country’s discomfort lies there [in the US] and I am expecting you to do whatever is necessary. I ask for your help, just like you for ask my help whenever some people [in Turkey] threaten the US’s internal security. And he [Obama] looked on it positively, and he said ‘I got your message’.”

‘An unusual rebuke’ from the White House

The McClatchy news group in Washington called the White House statement on Erdoğan’s remarks “an unusual rebuke,” on Saturday.

“No one in Washington denies that Erdoğan, during a phone conversation with Obama, demanded the extradition of Gülen to Turkey. But what has surprised Americans is that the prime minister is keeping the extradition issue on the national agenda, even though US authorities have told him that the extradition demand is not a good idea and that the Turkish government would not be able to get what it wished,” Today’s Zaman columnist Ali H. Aslan wrote on Saturday.

“What is more surprising is the prime minister’s claim that Obama is warm to the demand for extradition. Americans cannot believe how the Turkish prime minister sought to misinform his people about a conversation he had with the US president,” he added.

According to sources in Washington, Aslan reported, Obama clearly said the US does not want to be involved in this issue, but the prime minister kept up his complaints and, when Erdoğan finished talking, Obama said, “I got your message.”

“Observers in Washington do not see Obama’s remarks as a ‘green light’ for the extradition of Gülen. The fact that Prime Minister Erdoğan keeps bringing up the Gülen issue and is even claiming that Obama is open to the scholar’s extradition is very disturbing for the US administration,” wrote Aslan.

The first reports about Erdoğan’s complaints about Gülen during his phone conversation with Obama appeared in the Turkish press following Erdoğan’s breakfast meeting with ruling Justice and Development Party (AK Party) deputies on Feb. 24. According to the Radikal daily, Erdoğan told Obama that Turkey does not interfere in the US’ internal affairs but the US is hosting a person (Gülen) who is interfering in Turkey’s internal affairs.

When asked whether Turkey had officially asked the US authorities to extradite Gülen, a Turkish Foreign Ministry official told Today’s Zaman on Friday that he does not have information on the issue and the Justice Ministry is the place to raise that question. In an interview with the Habertürk TV station on March 6, Justice Minister Bekir Bozdağ said the Turkish government had not made any attempt to extradite Gülen. Bozdağ said there are no obstacles preventing Gülen, who has been voluntary exile for more than a decade, from returning to Turkey.

According to a diplomatic source who spoke to Today’s Zaman on condition of anonymity, there is no legal basis for the extradition of Gülen because there is no legal evidence suggesting that Gülen’s supporters are “a state within a state.”

An agreement called the “US-Turkey Extradition and Mutual Legal Assistance Treaty” determines the legal basis for extraditions either from Turkey to US or vice versa, and the Turkish government needs to provide tangible evidence against Gülen in order to have him extradited.

The source, speaking on Saturday, said it is puzzling why the Turkish prime minister would bring the issue up again in his TV interview when Turkish officials had seemed to understand the US position on Gülen, namely that there is no legal basis for extradition at this point, when the issue was discussed by Turkish and US officials about 10 days ago.