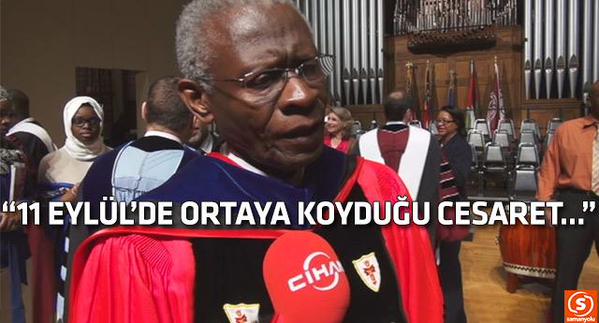 Speaking to Cihan news agency, Carter stated that they have been looking for a recognized Muslim leader who deserves that award for a long time. Courage shown by Gülen who condemned September 11 attack made him to deserve the award, said Carter.

He further stated that there are some defamation campaigns against Gülen which is pretty sad. Carter said some media institutions have been covering some slanderous news about Gülen and Hizmet Movement. “However, Turkish people are not silly to believe such lies,” added Carter.

Representatives of the Martin Luther King Jr. International Chapel, which has presented the award since 2001, say the award is designed to promote the importance of positive social transformation by honoring “those who demonstrate extraordinary global leadership toward reconciling differences.”

The Gülen movement has spread to more than 160 countries around the world and has a vast network of schools, charity organizations, health institutions and cultural dialogue centers. The volunteers of the movement often have to confront dire conditions in countries they serve, ranging from Ebola-stricken nations in Africa to conflict-ridden countries in the Middle East.