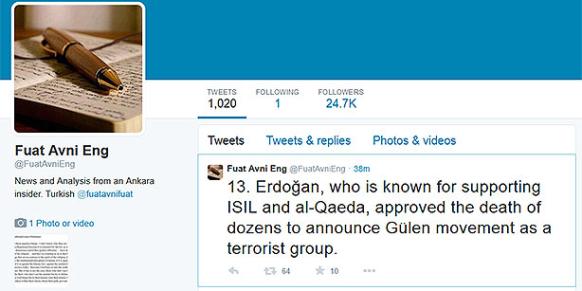 Fuat Avni, the whistleblower’s Twitter handle, tweeted early on Saturday that Presiden Recep Tayyip Erdoğan had initially planned to use the Dec. 14, 2014 operations against the media to announce the Gülen movement as a terrorist organization, but had to resort to other methods to do so as that failed.

“After the fiasco,” Avni tweeted, “Erdoğan tasked the spy agency [National Intelligence Organization] MİT with labeling the Gülen movement as a terrorist organization.” He claimed that Erdoğan has had difficult time after the recent Charlie Hebdo incident in Paris because of his support for the Islamic State of Iraq and the Levant (ISIL) and al-Qaeda. “To get out of this difficult period and turn the tide in his favor, Erdoğan is making new evil plans,” Avni tweeted.

Avni claims to be in the Erdoğan’s inner circle. A recent article in Foreign Policy magazine said Avni “has proved to have startlingly accurate knowledge of events before they happen” and he has “captivated the country with his mostly reliable predictions of events.”

“A terror act that will kill dozens of innocent people in a large city was planned by Hakan Fidan and presented to Erdoğan,” the whistleblower wrote, sending shockwaves through social media and hitting the Sunday morning headlines of Turkish media.

He claimed that spies from MİT will commit the terror acts and present themselves as being from the Gülen movement. He added that the president didn’t hesitate to approve a “terror act that would kill dozens so that the Gülen movement is remembered as a terrorist group.”

“I’m warning all citizens against possible terror acts orchestrated by Hakan Fidan’s unit in the very near future,” the whistleblower said, urging the people to stay away from big shopping malls and crowded areas. “You could be a victim of Erdoğan’s evil plans,” he said.

He stated that terror acts “are planned to take place in malls and AKP [AK Party] buildings so as to increase rancor and violence against the Gülen movement.”

Gültekin Avcı, a retired public prosecutor who is also a columnist for the Bugün daily, said via his Twitter account that operations against the Kurdish Communities Union (KCK), an umbrella organization which the outlawed Kurdistan Workers’ Party (PKK) is under, have already revealed that many MİT staff were involved in bombing and Molotov cocktail incidents.

“When bombers or Molotov throwers who are members of MİT were arrested in the KCK operations, MİT intervened and told the police not to touch them because they are ‘their men’,” he recalled.

Giving some examples from incidents which turned out to be the work of the KCK and MİT, he said a suspected PKK militant who was captured as he was trying to enter a police station in Diyarbakır with bombs attached to his back turned out to be a member of MİT.

In another incident cited by Avcı, a suspected KCK member who threw a Molotov cocktail at a municipal bus in İstanbul several years ago and burned the vehicle, leading to the death of a young woman named Serap Eser, was also revealed to be a MİT member.

“A suspected KCK member who was trying recruit new members to the PKK in the rural parts of the province of Van and helped 20 people join the PKK, was discovered to be a MİT member. MİT turned out to have helped Orhan Yılmazkaya, [an alleged terrorist who was killed in a shootout with police in which police officer Semih Balaban was killed in 2009] to go to Kandil [the PKK base in northern Iraq]. It was found out that the KCK’s provincial head in the province of Mersin who organized and was involved in dozens of attacks in the area was a MİT member. It was the MİT that took [jailed PKK leader Abdullah] Öcalan’s orders to Kandil. In PKK attacks launched on orders from Öcalan, 134 soldiers and police officers were killed,” wrote Avcı.