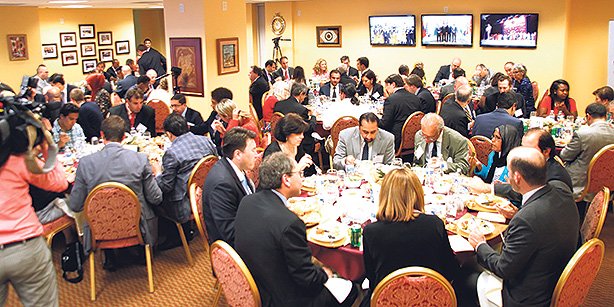 Speaking to the gathering at the beginning of the iftar, TAA President Faruk Taban explained that the holy month of Ramadan is a time to give thanks, bringing together family, friends and loved ones. Taban also mentioned that the TAA offers iftar to the public at its Washington office almost every day of Ramadan.

At the dinner, speakers addressed the topics of unity and friendship. Congresswoman Debbie Dingell, a Democrat in the House of Representatives, expressed gratitude for the iftar and stated that her attendance was an effort to be a part of the community represented by the TAA. The event was the fourth iftar the TAA has organized for members of Congress, and was also attended by the imam of the Ezher Mosque in Fairfax, Virginia.

The call to prayer was recited in the meeting hall of the US House Committee on Armed Services, where wartime decisions have been made.

“Love is a Verb,” the first feature-length movie about prominent Islamic scholar Fethullah Gülen and the Hizmet movement, or Gülen movement, inspired by Gülen’s views, was shown during the dinner. The film was co-written and directed by Terry Spencer Hesser.

The TAA is the largest Turkic civil society organization in the US, consisting of six regional federations and including more than 200 associations.