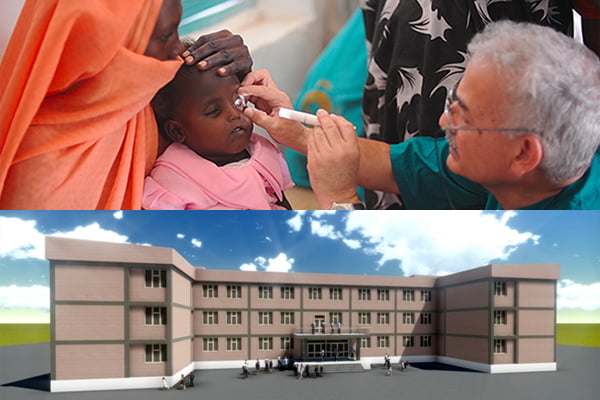 A hospital established by the Marmara Health Federation (MASFED) and the Turkish charity Kimse Yok Mu (Is Anybody There) in Ethiopia is scheduled to open and begin serving the public in the coming months.

The rough construction of the 40-bed Harari Hospital is finished, but the final outfitting of the facility is still under way. Hospital officials stated that they hope to be ready to open very soon. The hospital was built with funding provided through donations, and charitable contributions will also be the source of its ongoing support.

A total of 50 medical healthcare personnel from both Turkey and Ethiopia will serve the people in the Turkish hospital. Ten of the doctors working in the hospital will be Turkish volunteers. Five of them will stay in Ethiopia permanently, while the others will remain in the country for three to six months. The hospital will work in particular to fight such epidemics as malaria, measles, meningococcal septicemia and typhoid fever, which are the biggest problems in the country, as is infant mortality. The average life expectancy in Ethiopia is only 40 years.

Speaking to Today’s Zaman, MASFED Secretary-General Gökhan Yiğit said: “The average life expectancy here is only 40 years, and we are calling on everyone to help these people who are really in need. We are waiting for help from all generous people and believe that every single donation can help to save the life of a child,” he said. He added that TL 5 million is needed to finish the hospital. “I hope we will solve this funding problem in the next few months with the help of charitable people,” he said.

He also noted that “Ethiopia’s Harari region was once under the administration of Turkey’s predecessor, the Ottoman Empire, so we give particular importance to this region. When the hospital is complete, our doctors will leave their jobs in Turkey and will go to the Harari area to serve people at the hospital.”

A urologist, a pediatrician, an internal disease specialist, a general surgeon and a pathologist will remain permanently in Ethiopia. The other temporary doctors will be from other fields, and these visiting doctors will change at regular intervals. The Ethiopian doctors and healthcare personnel who will work at the hospital will also be provided with some training in Turkey.

Stating that making such a big investment in Ethiopia has pleased the Ethiopian authorities, Yiğit further said that because the rate of infant mortality and other serious medical problems is very high in Ethiopia, the opening of the hospital in the country will be very helpful to the residents there.