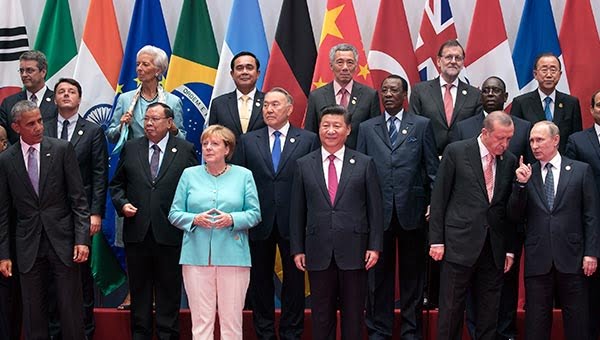 US President Barack Obama met with Turkish President Recep Tayyip Erdogan on Sunday at the G-20 summit in China.

Though the purpose of the two-day gathering was for representatives of governments and central banks to discuss policy issues pertaining to international financial stability, the tete-a-tete between Obama and Erdogan on the sidelines of the forum was not about money. It was, rather, a meeting of the minds on a subject close to the hearts of both NATO allies.

With his Cheshire-cat grin and dead eyes, Obama patted his Turkish counterpart on the back and congratulated him on a job well done. Erdogan had not only survived an attempt to oust him, but had quashed it like a true tyrant. Obama could only look on in awe and envy.

Following their little chat, the two leaders addressed the press at the JW Marriott Hotel in Hangzhou.

“By taking to the streets to resist the coup attempt, the Turkish people once again affirmed their commitment to democracy and the strength and resilience of democratic institutions inside of Turkey,” Obama said. “I indicated at the time the unequivocal condemnation of these actions and spoke personally to President Erdogan to offer any support that we might be able to provide in both ending the attempted coup, but also in investigating and bringing perpetrators of these illegal actions to justice.”

One form this help is going to take, Obama hinted, is the possible extradition to Turkey of controversial cleric Fethullah Gulen, whom Erdogan claims orchestrated the failed coup from his home of self-exile in Pennsylvania.

Obama also extended his “deepest condolences” to Turkey’s victims of terrorism, and said that he and his pal “Tayyip” had consented “to continue pursuing a peaceful political transition in Syria.”

Let’s start with the failed coup. Erdogan’s paranoia about Gulen is likely unfounded. If any conspiracy theory is in order, it is that Erdogan himself planned the whole thing, in order to strengthen and legitimize his already suffocating stranglehold on the country.

For years prior to the botched attempt, the Turkish president was gradually purging his society of dissent. No institution was exempt from his wrath, with members of the press and academia being placed under a particularly high-powered microscope. Arresting journalists for daring to publish pieces that exposed his behavior was commonplace well before July 15, the date of the coup. But the practice paled in comparison to what has been taking place across Turkey in the weeks since then. Tens of thousands of citizens whom Erdogan deems a threat to his reign of terror have been fired from their jobs, thrown into prison or both. These include people from the military, the police, the judiciary, the political echelon, the media and the universities.

It is typical of Obama to condemn the victims of such a travesty. But to describe the failed coup as a re-affirmation of the Turkish people’s “commitment to democracy and the strength and resilience of democratic institutions inside of Turkey” borders on willful lunacy and blindness. As was the case with the foiled Green Revolution in Iran, when the newly instated administration in Washington watched from afar as the regime in Tehran gunned down protesters trying to extricate themselves from the mullahs dictating their every move, the White House once again simply watched from afar, and let the forces of evil wreak their havoc uninterrupted.

Erdogan’s cross-border attack, code-named Operation Euphrates Shield, was launched on Aug. 24 and is still going on. This “peaceful political transition” is being carried out by Turkish planes, tanks and artillery. But Tayyip’s friend Barack — the real turkey in this tale of woe — forgot to mention it.

Ruthie Blum is the managing editor of The Algemeiner.

Click below link to read the full article as content here is excerpts from the original one.