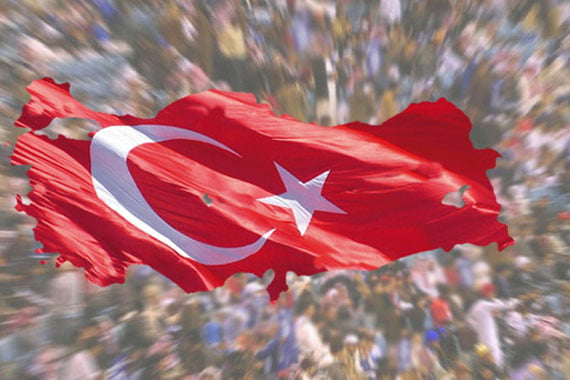 The Turkish press has been dominantly occupied with the coup and violence in Egypt and Syria, and one more issue that has erupted, as if out of no where, is a so-called rift between the government and the Gulen Movement (GM), an influential faith-inspired educational movement. The story goes that some influential circles within the ruling party, or supporting it, believe the GM was behind the Gezi Park protests which caused serious problems for the government. The protests had started to stop a government project to erect a historical barracks with a shopping center on the site of a small but famous park in Istanbul. But later on, the protests evolved into a full-scale anti-government action. This rather hard-to-believe accusation about the GM has later expanded to repeat the old cliche that GM members are secretly infiltrating the state bureaucracy and the government is doing its best to keep them away, if not kick them out of their positions totally.

I think this is a futile dispute, apparently based on misinformation and false fear, and will serve no positive purpose for Turkey. The Gulen Movement, aka Hizmet, is very well known for its capacity to maintain a certain level of distance, and proximity, to all political groups. That distance is a sine qua non for this movement which is extremely cautious not to appear on any side of the naturally divisive political spectrum. Hizmet rather positions itself in a dynamic pendulum, and this positioning not only makes them equally accessible for every one, regardless of their political choice, but also frees them from possible burdens and engagements that may arise from hooking oneself to a single party. This essential condition is difficult to digest for political parties which prefer to see their supporters openly declare their sides, march for them in rallies, and sing ballads of unconditional love and support. Hizmet has never done that in the last four decades since its inception in the ’60s.

The only exception – still without an unconditional lifetime commitment – was perhaps the constitutional referendum in 2010, which coincided September 12, exactly the same day 30 years later after the coup d’etat in 1980 that had penned the humiliating junta constitution, which is still effective. Fethullah Gulen said before the referendum that every Turkish citizen should vote “yes” for this reform package introduced by the government, resulting in a landslide pass. Mehmet Ali Sahin, a leading figure in AK Party and the former parliament speaker, said recently that AK Party could start wielding real power as an elected government only after this referendum, before which Turkey was under the tutelage of the army and appointed civilian bureaucracy.[1] Professor Burhan Kuzu of AK Party repeats the same sentiments when he says that if it was not for the referendum and the constitutional revisions, AK Party was definitely going to face another closure case.[2] Turkey was able to accomplish the September 12th and Turkish citizens fulfilled their duty that day. Yet, it would be daydreaming to wish such a single day to descend from the sky for all other countries suffering from a similar tutelage and oppression. Such a day is very much unlikely without strong civil society networks that are able to empower people for nationwide goals.

The Gulen Movement is one such group – not only because of its media power but also because of its wide public outreach throughout the country. It is perhaps the widest fellowship of voluntary associations – at least in the Tocquevillen sense, where groups gather around the ideas and inspirations of Fethullah Gulen. It is a movement of a combination of formal and informal associations yet without a headquarters, without a common name, logo, or sign, which, as understood from the recent dispute, is for some circles a threat to the government and even to the prime minister. These circles perceive – mistakenly, at best, or intentionally, at worst – a ghoul-like nature of Hizmet, which, for them, is present everywhere, dominates all bureaucracy – including the judiciary and the police – and constitutes something like a parallel rule next to the government.

Gulen himself said several times that he has always encouraged those coming to listen to his sermons and talks to rear their children not to become imams or preachers only, but to enroll them in the best schools so that they can serve their country as teachers, doctors, engineers, soldiers, judges, prosecutors, and as police. And he has been doing that since 1960s. So, yes, there should be quite a number of bureaucrats who sympathize with his ideas, try to emulate his code of ethics and citizenship, and certainly his advice on civic service. Being inspired from his ideas does not, or should not, disqualify a person from public service, and blacklisting individuals according to their civil or faith-related associations is a violation of human rights. Unfortunately, this seems to be what is happening in Turkey, as understood from a recent statement released by the Journalists and Writers Foundation, of which Gulen is the honorary president: “… due to a large number of news reports in recent times, it is public knowledge that those members of the judiciary who were alleged to be close or sympathetic to the Hizmet Movement have now been dismissed from their posts.”[3]

About politics and power sharing, Hizmet philosophy is what Gulen himself would call “Hasani.” Hasan was one of the two beloved grandchildren of the Prophet Muhammad, peace be upon him. Hasan “declined the highest political and spiritual position in Islam as caliph in order to prevent bloodshed when the Muslim community was divided into two groups, and if either leader had insisted upon leadership, it would have caused further conflict. Although he had the majority of the community on his side, Hasan (r.a) did not want to endanger people’s lives and risk the community’s stability by accepting the popular support. Choosing the greater communal benefit over all kinds of individual benefits is a very important rule in Gulen’s philosophy. In Gulen’s works, Hasani ruh refers to being altruistic, trustworthy, peaceful, and devoted to the service of humanity.”[4] It is nonsensical to be paranoid over baseless arguments, as if Hizmet is the greatest challenge to the current government. Whoever comes to the office should make use of Hizmet’s potential to the benefit of all nation. If there is any criticism coming from Hizmet, then the government should know it is not to the advantage of any person or group claim for power sharing.

Turkey is lucky to have Hizmet Movement with its outstanding educational services, relief organizations, and intercultural dialogue efforts within Turkey and around the world. It is also a blessing that this movement has raised generations of well-educated Turkish young men and women who are now serving in their own capacity in numerous official and civil posts. Individuals who are dedicated to rule of law and motivated to serve their nation are a blessing to a government like AK Party, who by now should have already acknowledged their support for many reforms accomplished in the last decade. Lasting reforms is possible in the long term in a bottom-up direction in which the people rise by merit to rule themselves, and a government’s responsibility is facilitate that natural upward process rather than imposing things on the society downward. If a nation cannot achieve to make the current flow in that direction, then “spring” becomes a very short-lived season, and the gloomy fall comes back again.

MYRA BLACKMON By the time you read this, I will be in Istanbul, as part of a group beginning a week-long tour as a guest of the Gulen Movement. We will visit tourist sites, but also meet with media folks, spend time in schools and universities and enjoy several dinners in private homes. We will […]