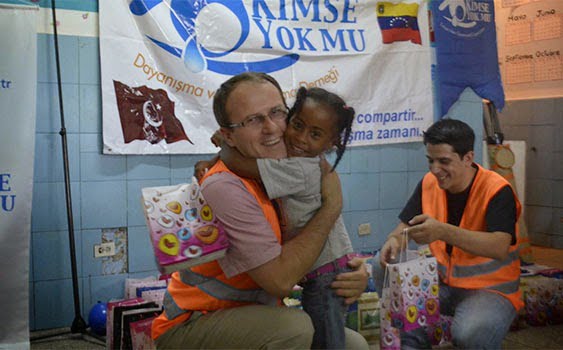 Its volunteers spent the eid with the orphan, also gave away food packages and meals to 200 orphans, in cooperation with the local Turkish-run Puento Foundation. The children also received their eid gifts from the volunteers.

The foundation’s international director for assistance Yusuf Yildirim spoke on their Ramadan efforts: “We reached out to the needy in 5 continents. Our volunteers hit the road to share the eid joy with the Venezuelan orphans. I believe the smiling of the faces of children have been the best “thank you” to those having shared the joy of giving with us.”

KYM, which has been a beacon of hope to the millions in need with the Ramadan efforts, has brought the Ramadan abundance to the needy, particularly the orphan, across the world.

Kimse Yok Mu (Is Anybody There), a Turkish charitable association, has laid the foundation for a 46-bed hospital in the Haitian capital Port-au-Prince’s Croix-des-Bouquets district, which has a population of 500,000. An estimated 200,000 people died in Haiti, one of the poorest countries in the world, in January when a magnitude 7.0 earthquake struck. Hunger […]