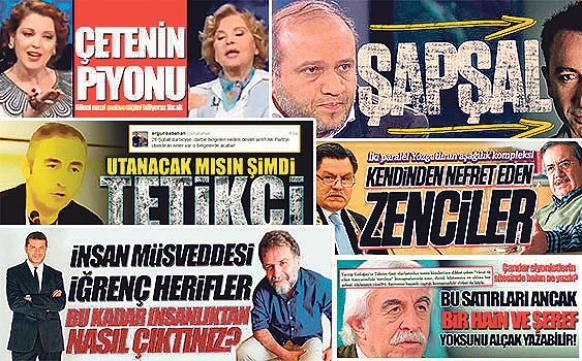 In a development that is likely to go down in history as an example of a judicial scandal, an investigation has been launched into some well-known journalists who had taken legal action against certain smear campaigning websites that have been employing highly offensive, libelous and accusatory language targeting the journalists due to their criticisms of the government, according to some media reports.
Circles close to the Justice and Development Party (AK Party) government have been accused of conducting a large-scale smear campaign against the Hizmet movement, which is inspired by Turkish Islamic scholar Fethullah Gülen, media outlets close to the movement and journalists critical of the government. The campaign has been going on since a corruption scandal erupted on Dec. 17 in which three former Cabinet ministers’ sons, many state bureaucrats and prominent businessmen accused of giving bribes in exchange for favors have been implicated. The government has accused the Hizmet movement of participating in a plot that is behind the corruption investigation.The targeted journalists — Zaman Editor-in-Chief Ekrem Dumanlı, Today’s Zaman Editor-in-Chief Bülent Keneş, Today’s Zaman Managing Editor Celil Sağır and Today’s Zaman writers Kerim Balcı and Emrullah Uslu — filed criminal complaints against the websites Medyagündem, Medyasavar and Haber10 at the İstanbul Anatolia Chief Public Prosecutor’s Office between June and December 2013.Public Prosecutor Mehmet Aydın has said there was a lack of grounds for legal action in the complaints, although an investigation into these websites by the İstanbul Anatolia Chief Public Prosecutor’s Office revealed evidence suggesting that these websites are owned and operated by the same people.

The quick closure of the investigation into the websites has attracted attention from both the public and the media. In addition, the journalists who filed the complaints have not yet been officially informed about why the investigation was halted.

According to a report in the Son.tv news website, which is affiliated with the government “pool media,” and reports on the websites of government dailies, a counter investigation has allegedly been launched into the Zaman, Today’s Zaman and Taraf journalists on charges of involvement in organized crime.

The Turkuvaz Media Group, which brings together such popular outlets as the Sabah and Takvim dailies and the ATV channel as well as the English-language Daily Sabah, has been referred to as the “pool media” since allegations surfaced that a group of businessmen formed a pool of funds to purchase the group as per the instructions of Prime Minister Recep Tayyip Erdoğan in return for privileged treatment in public tenders.

The counter investigation into the journalists was allegedly launched following a criminal complaint by Tutkun Akbaş, known as the owner of one of the websites, medyagündem.com. Akbaş allegedly filed a complaint against three police chiefs, Nazmi Ardıç, Ahmet Kalender and Metin Titiz in addition to those against journalists Dumanlı, Uslu, Keneş, Balcı and Sağır.

It is not known how these websites came to possess information about the details of an investigation that should be conducted confidentially.

There are some questions waiting to be answered. While an investigation into smear campaign websites is quickly closed, how can an investigation be filed against the journalists who are the target of these websites? How can the government media know about the details of this investigation when even the journalists involved are not in the know? What is the legal basis of accusing someone of being involved in organized crime when that person’s legal complaints are not even considered?

The smear campaign websites have made accusations and lies and committed libel in order to defame journalists who work in media outlets close to the Hizmet movement as well as those critical of the government. For instance, the websites introduce Today’s Zaman and Taraf columnist Uslu, an outspoken critic of the government, as “Mr. Fitna,” (evil), while Today’s Zaman’s Keneş is referred to as a “Zionist” while Sağır and Balcı are accused of being “servants” of foreign powers.

The technical examination into these websites revealed that they all come from the same source. The investigation also revealed that the websites share content with certain Twitter trolls who use defamatory and accusatory language against the Hizmet movement, Zaman and Today’s Zaman writers.

My life changed since I asked two critical questions at a conference held last week in Washington, D.C., with the participation of several pro-government journalists and experts from the Foundation for Political, Economic and Social Research (SETA), a Turkish think tank with close ties to the government. Insults about me, my paper and even the social community I am affiliated with were abundant.