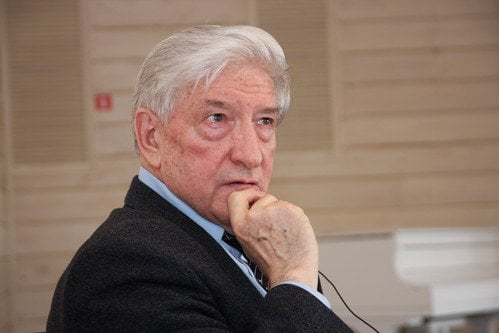 Valeriy Kononov, a Russian expert who served at trade consultancy at Russia’s Embassy to Ankara, Turkey.

Valeriy Kononov, a Russian expert who served at trade consultancy at Russia’s Embassy to Ankara, Turkey, and played role in many factories’ establishment in Turkey, referred to what’s being done to Kimse Yok Mu as a shame.

When asked about the investigations against the foundation, Kononov said, “No way, no way! I think whoever says this is a terrorist himself!” Kononov watches Turkey closely and said they intend to start new partnerships with KYM, reaching out to the needy all over the world.

Kononov is currently working for the Russia’s Council of Federation, the higher wing of the parliament, as an expert. “They are saying very bad things about KYM. The Southern Osetya went through very hard times. KYM offered to help the region and we researched the foundation. It was honored by the Turkish parliament and is known in 113 countries. It has chapters in over 30 countries. It’s recognized by UN, which has an economy and social council. And it lists this Turkish foundation among the top 100 charities around the world. It benefited over 3 million people by providing assistance.

Having found out all these, I said to the Osetya people ‘Don’t you worry at all. We have no doubt that this is a world famous, big organization. They are helping out immediately whether it’s a flooding or war or earthquake or storm. We have to count on this organization and accept its offer.’”

He said KYM sent a large truckload of food, medication and clothing assistance to the Southern Osetya through the northern part. He personally watched all the transactions. “But they wouldn’t stop. The Southern Osetya was tense. Bomb attacks were starting in the middle of the night wounding both adults and children. The people were stressed. And KYM offered psychological therapy service. They said they could take up to 20 children with their guardians, to Antalya, Turkey, for treatment. Turkish families were hospitable to them and regarded the children as their family. When those children were back they said they had never seen such a friendly and heartfelt treatment before.”

Kononov went on to say “We’ll start working for new partnerships coming days. A good effort, a good work is always remembered. People never forget such genuine acts. Our people met KYM and loved it. They would like to continue their relationship as well. And we will make that happen.”

“Kimse Yok Mu is working against terrorists. All of its work is a proof for that. Actions matter not the words, when it’s people in question. Do you see my point? I mean, you should judge people by their work not their words. This organization is present wherever a disaster is, in order to help people. Its core idea is to help people. It has noting to do with terrorism. Not a bit! We should believe in these people.”

Excerpted from the article published [in Turkish] on Haberciniz, May 5, 2015.