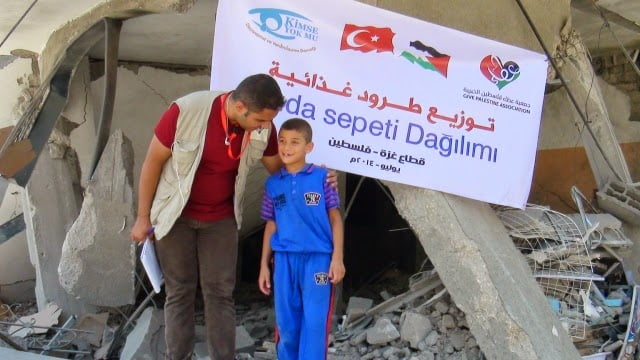 Kimse Yok Mu Foundation continues its efforts in the Gaza Strip. Kimse Yok Mu, in cooperation with its local affiliates, recently geared up to focus more on the region having limited connection with the world due to the blockade. KYM Palestine office is coordinating the efforts in Gaza. The foundation’s director for international efforts Yusuf Yildirim said they have been ceaselessly active in the region since 2006 and served iftar dinners to 130 thousand in Ramadan. “Gaza is one of the regions we have assisted most. Over the past month, for example, we have renovated 50 houses served iftar to 13 thousand including Gaza people who sought refuge in a UN school.”

“Additionally, we gave away food packages to 2 thousand families, household items to 200, and blankets to 350 families and clothing to 300 individuals. We’ve been providing daily milk to one thousand children over the month of Ramadan and performed 335 pediatric otorhinolaryngology surgeries.”“Moreover, we established water wells so that 60 thousand people can have access to drinking water and a vocational training and language school for the Palestinian orphans. We’ve been assisting Palestine for eight years. Conditions here got seriously worse. It is very difficulty for the locals to afford and access to their basic needs. In cooperation with our affiliates, we’ve been in an effort to do that for them. We encourage our giving Turkish people to donate so that the efforts can increasingly continue.” Staples demanded in GazaGaza Peace Foundation official Dr. Naser Elsadi as well spoke on the efforts: “We have recently kicked off a aid drive to cover our Gaza people’s medical needs. We have also started to treat the wounded in the recent attacks, in addition to the drive. We served hot meals to the refugees in a UN schools. KYM aid is remarkably important for Gaza especially during these days. Life in Gaza has become very expensive. We’ve been delivering the KYM food aid to especially the orphan and the needy families. But with the toughened life here, it’s become definitely hard to provide staples like milk and flour. Turkey’s donations are vital to the children here. We are grateful to KYM and the honorable Turkish people for the aid.”

HizmetNews.Com, October 12, 2014 Kimse Yok Mu receives a letter of appreciation from Uganda’s Office of the Prime Minister on October 3, 2014 for the aid it extended during and after disasters. The letter said: “On behalf of the Government of Uganda, through the Ministry of Disaster preparedness and Refugees and on my own behalf, […]