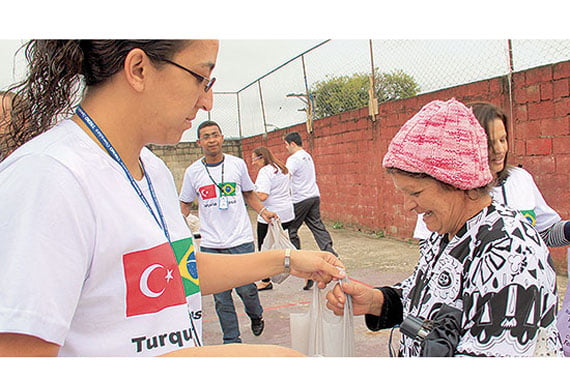 Volunteers from the Turkish charity Kimse Yok Mu have worked hard over the four-day Eid al-Adha festival to reach out to the poor, distributing food to families in faraway and impoverished countries. (Photo: Today's Zaman)

Turkish charities knew no borders in spreading benevolence across continents during the four-day Eid al-Adha festival, sacrificing animals, packaging the meat and distributing it and other forms of assistance to the less fortunate in many countries of the world.

Eid al-Adha is Arabic for “Feast of the Sacrifice” (Kurban Bayramı in Turkish) and is marked by solidarity and charity between families and friends as well as people in need. During Eid al-Adha, animals are slaughtered as a reminder of the Prophet Abraham’s willingness to sacrifice his son Ishmael to God as an act of obedience and submission. A portion of the meat is then distributed to the poor, along with other charitable donations, as per Islamic tradition.

Aid organizations such as Turkey’s Religious Affairs Directorate Foundation (Türk Diyanet Vakfı), Kimse Yok Mu (Is Anybody There), the Humanitarian Aid Foundation (İHH), Turkish Red Crescent (Kızılay), Doctors Worldwide and the Deniz Feneri Association sent aid throughout the country and around the globe during the holiday. They distributed food, clothing, money and other forms of assistance to the poor in most of Turkey’s 81 provinces and in more than 120 nations around the world.

The helping hand of Kimse Yok Mu was in countries such as Myanmar, India, Kenya and Somalia during this Eid al-Adha. Kimse Yok Mu General Manager Celal Türkoğlu has said the foundation delivered five-kilogram meat packages to 50,000 families in need in Turkey, while this figure was 300,000 families worldwide. He said a total of 3,200 volunteers took part in the foundation’s Eid al-Adha campaign, delivering meat to these families. Türkoğlu said the delivery of meat packages was 90 percent completed on the second day of Eid al-Adha.

On the third day of Eid al-Adha, Turkish businessmen affiliated with Kimse Yok Mu delivered sacrificial meat to 15,000 families in need in Brazil. The deliveries took place in the shanty neighborhoods of Sao Paulo, Rio de Janeiro, Brasilia and Sergipe, and 36 tons of meat were delivered.

Turkish businessmen left dozens of packages of meat at an orphanage in one of the shanty neighborhoods upon learning that the orphanage had run out of meat.

Very happy with the aid packages they received, Fatima Paiva, an official from the orphanage, said: “We did not have any meat to offer the orphans. Thanks to this aid delivery, which was very timely, we will cook meat for the children for lunch today. I offer my thanks to everyone who took part in this aid drive.”

In the Venezuelan capital of Caracas, Kimse Yok Mu volunteers delivered sacrificial meat to people in need in Petare, a shanty neighborhood, where they were welcomed by the locals.

The residents of the neighborhood formed long queues to receive a meat package.

Kızılay sacrificed animals in 13 countries during this Eid al-Adha and took sacrificial meat to 65,000 families and a total of 320,000 people around the world. Bulgaria, Kosovo, Macedonia, Montenegro, Bosnia and Herzegovina, Ethiopia, Somalia, Djibouti and Kenya were some of the countries where Kızılay reached out to people in need. It also delivered sacrificial meat to around 1 million people in Turkey.

The Cansuyu Aid and Solidarity Association put a smile on the faces of refugees in the Dadaab Refugee Camp in Kenya, where it handed out 5,000 shares of sacrificial animals.

Şerafettin Molla, an official from Cansuyu, said it is their duty to share the joy of Eid with Muslims who can only eat meat once a year.

“People wait for the help of Turkish people here,” he said.

The Yardımeli Foundation slaughtered sacrificial animals in 30 countries and 40 regions around the world during this year’s Eid al-Adha. The foundation’s main destination was Gaza, which is suffering from the Israeli blockade. In addition to Gaza, Yardımeli was able to spread the joy of Eid al-Adha in countries such as Somalia, Syria, Sudan, Mauritania, Bangladesh, Malawi, Tanzania, Azerbaijan, Ethiopia and Bosnia and Herzegovina, reaching out to 132,000 families.

Refugees were a priority for İHH during this Eid al-Adha. The foundation delivered 5,200 shares of sacrificial animals to displaced Syrians in Damascus, Aleppo, Idlib, Lataika and those living in camps in Turkey, Iraq, Yemen, Lebanon and Jordan. A total of 3,000 refugees benefited from the İHH’s aid delivery. The foundation slaughtered sacrificial animals in 114 countries and regions given by Turkish donors.

İHH teams that were in Idlib for Eid al-Adha also visited a camp established for orphans by the İHH in Syria.

Ahmet Alluş, an official from the camp, said the needs of the camp are met by İHH’s benefactors.

“It is mostly women and children who live in this camp. In order to help the children to feel the joy of Eid, we delivered candies to them. But it is no longer easy to make these children happy,” he said.

The İhlas Foundation’s destination for its Eid al-Adha campaign was Africa, where it slaughtered donated animals in countries such as Ethiopia, Sudan and Kenya.

The foundation’s Mehmet Okyay said the goal of the foundation is to reach out to all the Muslims in each of the African countries.

“This is both a religious and historical responsibility,” he said.

Hasan Gümüş, a representative from the İhlas Foundation in Somalia, visited the Turkish Embassy in the country during aid deliveries on the second day of Eid al-Adha. He also paid courtesy visits to some official and private institutions in Mogadishu.

“We will bring more aid to Somalia in the years ahead,” he said.