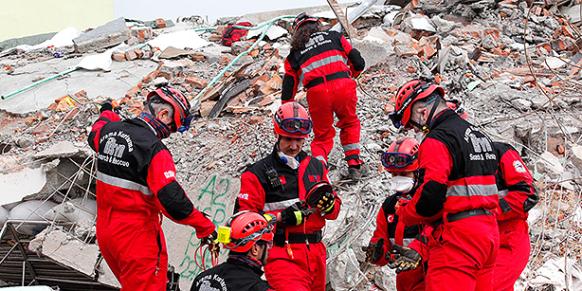 Kimse Yok Mu teams join search and rescue operations in Nepal after a magnitude 7.9 earthquake struck the country and caused the deaths of thousands of people. (Photo: Cihan)

Humanitarian aid organizations from around the world have sent teams to help the search and rescue operations in Nepal after a magnitude 7.9 earthquake struck the country and caused the deaths of thousands of people. The earthquake also destroyed most of the houses and historical monuments in the area.

According to OCHA’s report released on their official website on April 29, 54 international Urban Search and Rescue (USAR) teams from 22 countries comprising 1,719 personnel were sent to Nepal after the earthquake. The report also said 6,250 people died and 14,357 were wounded in the earthquake.

Kimse Yok Mu dispatched a team to Nepal on April 26 and pledged TL 100,000 in donations for the tragedy.

Other humanitarian aid organizations from Russia, Poland, Germany and several other countries were included on the list.

ALYSON NEEL, İSTANBUL Turkish charity groups are putting the final touches on preparations to help the less fortunate both in Turkey and across the globe during the Islamic holiday of Eid al-Adha (Feast of the Sacrifice), which begins on Nov. 6. It is that time of year again in Turkey, as aid organizations such as […]