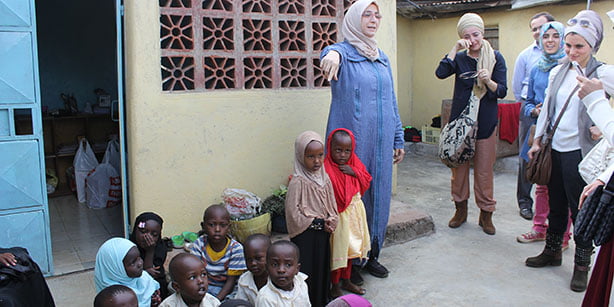 NAIROBI
A delegation of volunteers from Turkey, along with Turkish educational volunteers in Kenya, reached out to orphans in Nairobi on Monday in a visit to the capital’s Kibera slum.

One Turkish educational volunteer, Nurten Kutlu, guided the group, which has been visiting the country to help orphans, in a trip organized by aid organization Kimse Yok Mu (Is Anybody There) in Kibera, which generally does not welcome Caucasians. Kutlu says that, as Turks, they are welcomed in the neighborhood due to their aid work in the country.

As the group delivered the aid that Kimse Yok Mu had brought to Kenya, a guardian of the orphans in Kibera told the group about the teaching and care they provide to the kids, who are mostly Muslim. The madrasa-orphanage hosts 30 girls and 15 boys in very modest conditions.

Turkish schools have become a trademark in Kenya

The Turkish delegation also visited the Light Academy in Nairobi on Monday, which was established by Turkish entrepreneurs in Kenya.

Hosting the group at the school, which is in an affluent neighborhood of Nairobi, principal İsmail Küçük said their school had been opened by President Abdullah Gül in 2009. However, the first Turkish school in Kenya was established in 1998, and by now a total of eight Turkish high schools boast alumni who benefited from college education in 74 countries. Over 500 graduates have attended universities in Turkey, and 257 of them will receive their degrees in teaching and serve in their home country of Kenya.

According to the data provided by Küçük, 75 percent of their students are Christians and the remaining 25 percent are Muslims. At the Light Academy, 10 of a total 52 teachers are from Turkey. The school grants scholarships to academically gifted students. Currently, 40 of the 140 students in the science department of the school receive these scholarships.

The school also organizes the Golden Climate International Environmental Project Olympiad (GCIEPO), an international environmental science competition for students, the first of its kind in Eastern and Central Africa.

Principal Küçük answered questions from the Turkish delegation, saying there is great potential in Africa and the future is bright for Kenya.