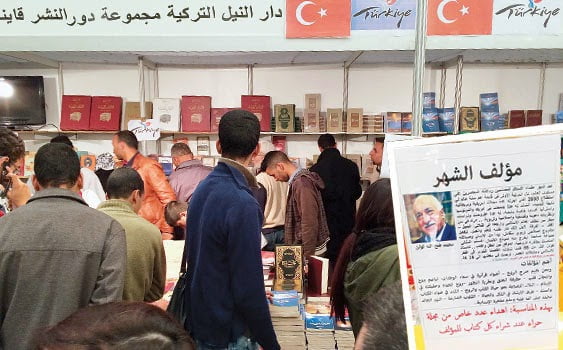 The Moroccan capital city Rabat-based Elfiye Publishing, the largest publishing company in the nation, named Gulen the author of the month. All of his books and those on the Hizmet Movement available in Arabic were on display at the publishing’s store throughout the month. Dar al-Nile Publishing, the Turkey-based Kaynak Kultur Publishing’s Arabic affiliate, was the only participant from Turkey at the fair. The fair was held in a festival atmosphere with participation of over 700 publishing companies from 54 countries. Of all the books at the Dar al-Nile stalls, Gulen’s prophetic biography “Messenger of God: Muhammad” drew the most interest. Besides his books and several others on the Hizmet Movement, the late Moroccan scholar Farid al-Ansari’s “The Last Cavalier,” and “Return of Cavaliers” were also among the best sellers.

Dar al-Nile official Sukru Sahin said they had more books at their stalls than last year but many of them sold out before the fair ended. He said Gulen has had many readers in Morocco for years. Sahin further shared the reflections of their visitor. “A Moroccan deputy visited our stalls and bought Gulen’s entire collection, several books on the movement and Risale-i Nur Collection in Arabic, after looking through them for quite a long time. He said, ‘Many books here at the fair are repeating or annotating each other. But I see original views and perspectives in what I’ve bought from you.’ Many Moroccans also expressed their resentments over the slanders and insults recently leveled at the Honorable Gulen.”

İLHAN GÖKALP/TUĞBA ÜLGER, LONDON Many of her fans would say her songs touch their soul, with the rhythmic patterns of her smooth voice combining Arab and Western flavors in a harmonious bridge between East and West. Born to a father of Arabic-Jewish ancestry and a British mother, singer Natacha Atlas is among the most popular […]