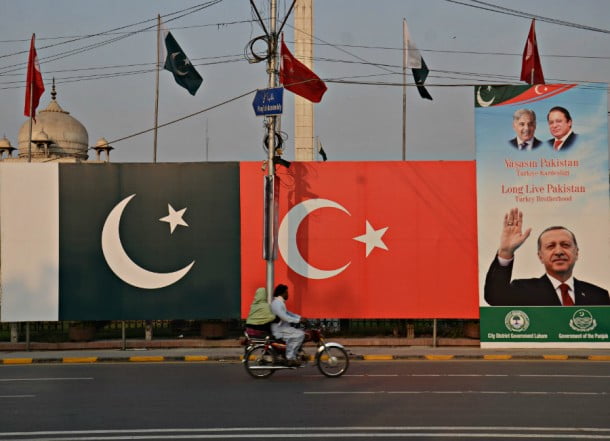 A Turkish family is rushing out to a weekend protest in this populous Pakistani city; outside the Karachi Press Club, Turkish residents release doves as a sign of peace; 25 Turkish teachers plea for safety in Pakistan. These Turkish families have lived here for over two decades, teaching at a network of international schools led by Fethullah Gülen, a moderate Islamic cleric from Turkey, who currently lives in the United States.

In the last 16 months, 28 Gülen schools and colleges across Pakistan have been shut down under pressure from the government in Ankara. Staff members now face deportation and some say they are feeling unsafe in Pakistan for the first time.

In July 2016, a failed coup attempt sent shock waves through Turkey. President Recep Tayyip Erdogan blamed the coup on Gülen, his rival, and on Gülen’s followers. In the coup’s wake, Erdogan strengthened his grip on power, cracking down on journalists, academics and real or perceived critics. Some 50,000 people were arrested and most are still detained.

“Journalists, activists, teachers, media workers have been prosecuted on allegations of being linked to Fethullah Gülen or the Gülenist movement,” explained Saroop Ijaz from Human Rights Watch Pakistan. “And there has been an absence of credible evidence to suggest widespread involvement or complicity of the people being prosecuted in Turkey by the present regime in the failed coup attempt,” he said.

At its height, the Gülen network had about 2000 schools around the world, teaching Gülen’s brand of Islam, which promotes charity and service. But critics say the schools also raised funds and increased the influence of Erdogan’s rival in Turkey.

After the attempted coup, Erdogan pressured foreign governments to shut down the Gülen schools and deport their staff. Pakistan complied and last November, 1,500 Turkish staff members were ordered to return to Turkey.

The wife of one teacher, identified as Ms. Gulmez, said she was afraid of what awaited them there. “There will be some kind of interrogation and maybe arrests because our names are on their list, as we also heard from our embassy,” she said.

They put all of us in one basket, though we are not violent.

The teachers have appealed the Pakistani government’s decision, stalling the deportation of 78 families, but they are awaiting final verdicts.

Gulmez maintains her innocence. “They put all of us in one basket because of the Gülen group, though we are not violent or mixed in this claimed coup,” she said. Some 300 people from 78 Turkish families have registered with the United Nations Refugee Agency and have been granted asylum for a year, until next November.

But Yilmaz’s husband, the teacher, says that has offered little safety. “We somehow felt safe in Pakistan, we lived here under the umbrella of the UNHCR,” he said. But that changed on Sept. 17, when it was reported that some families had been abducted from their homes. Since then, he said, “the people, the families, the ladies, the kids they feel they are not in safe place anymore.”

Mesut Kacmez, a deputy school principal, and his family were allegedly detained by the Pakistani security agencies in the eastern city of Lahore in September. Weeks later, they were deported to Turkey against their will.

Saroop Ijaz, a Human Rights Watch lawyer, says Pakistan has a duty to protect the teachers, instead of giving in to Turkey’s demands. Pakistan must not “put its international credibility and its compliance with international obligations at risk” in order to carry out the Turkish government’s political objectives, Ijaz says. “I think it’s completely unacceptable and also a violation of international law.”