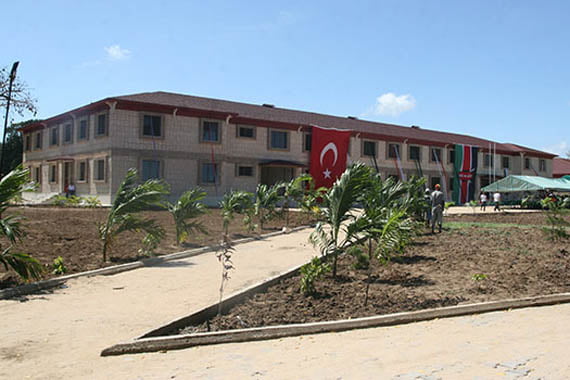 Kimse Yok Mu volunteers have taken action to heal Kenya where 68 people lost their lives in a terrorist attack last month. Thanks to the Anatolian philanthropists and volunteers, thousands of African families were able to enjoy Eid al-Adha sprit fully, as it should be.

160 Konya (a central Turkey province) philanthropists and volunteers under the leadership of Kimse Yok Mu Foundation and Kenya’s Omeriye Foundation pioneered bridges of brotherhood by personally delivering sacrifice meat to those in need in Mombasa and Malindi regions of Kenya.

Throughout the aid distribution which portrayed the brotherly feelings of Anatolian people, the volunteers also handed gifts of clothing and candies to the children. A total of 14 madrasahs -each delivering the aid packages to 260 families under the leadership of their imams- helped the efforts. Imam Hamisi Mohammad said he’s happy to be involved in such an organization. He further said he very much likes to visit Turkey to meet his Turkish fellows.

Following the aid distribution, they moved on to attend the grand opening of a complex comprising a hospital, soup kitchen, dormitory and a 720-capacity school; financed with the donations of Turkish philanthropists.

“Aid distribution rate has increased by 15% compared to the last year. We’ve let those in prisons, hospitals and the needy families -regardless of their faith- see Anatolians’ all-embracing face,” President of Omer Foundation and General Manager of Nairobi Light Academy, Bilal Karaduman, remarked.

“We are here for an enduring brotherhood”

The complex built by Kimse Yok Mu Konya Chapter and Omeriye Foundation in one of the country’s largest cities Malindi has been completed by 90%. Five hundred needy daily will be served meals in the soup kitchen facility. In the 36-bed and 4-operating theater hospital will be at Kenyans service, free of charge to a certain extent. And the large capacity school is intended for 720 underprivileged students.

At the event, the Konya volunteers quoted “We love the creature because of the Creator” from Yunus Emre and said they came to Kenya to establish enduring brotherhood ties.

On behalf of the local community, Bilal Karaduman expressed gratitude to Konya Merve Educational Institutions President Ahmet Sirin along with the volunteers.

“Anatolians are trying to restore unity and solidarity as opposed to those who tried to blow them up. These volunteers have come here with roses in their hands. We in return host them and try to contribute with logistics. This complex in Africa will be the embodiment of our altruistic tradition derived from our history,” he said.

Ahmet Sirin similarly said, “We were deeply saddened by the Westgate attacks. We’ve come from Rumi’s land, Konya, with the words “We love the creature because of the Creator” on our lips. No one should despise another because of his/her faith. I hope this complex will present an example of brotherly relations.”

Excepted from the article published [in Turkish] on Zaman, 27 October 2013, Monday