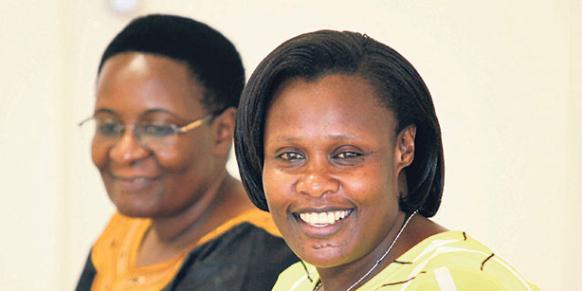 Ugandan Education Minister Jessica Alupo commented on the success of Galaxy International Schools in Uganda during a recent trip to Turkey.

Alupo stressed that the five Galaxy International Schools, which were opened by Turkish entrepreneurs and operate across Uganda with nearly 1,500 students, encourage pupils to grow as individuals.

“Uganda has a liberal education system. Private schools are able to provide direction in the manner they please. Turkish schools, although they are expensive, get the materials students need and invest in human resources. Therefore, they provide the country’s top 10 students and provide good results.” Alupo added that the examinations given at the end of each school year measure the success of the students.

“In Uganda, the private education sector consists of schools from American, British and Indian entrepreneurs, and despite being expensive, many statesmen prefer to send their children to Turkish schools,” said Alupo. She went on to explain that the other international schools only apply the international curriculum of foreigners — and not Ugandans — while Turkish schools in Uganda follow a curriculum that teaches students to grow as individuals who love their country. She added that it is not only the children of rich families who attend Galaxy International Schools but that students from the middle class or even rural areas are also able to attend the schools thanks to the scholarships offered.

Alupo explained, “Scholarship students living in dormitories do not find themselves staying in crowded dorms but instead in four-person rooms, much to their satisfaction,” adding that she would like to send her children to one of the Galaxy schools. She also noted that Galaxy will be opening its sixth school and that Ugandan President Yoweri Museveni completely supports this development.

The minister added that whenever she is in Turkey, she comes across new things and she is always met with hospitality. “We want to stay here always, we don’t want to go back,” she said.

With a population of nearly 40 million school-age children, Uganda has 9 million in elementary school, 1.5 million in middle school and 800,000 in high school. The country is home to 35 universities that are attended by a total of 150,000 students.

On June 16, Kimse Yok Mu (KYM) volunteers, geared up to assist Malawians, delivered 40 thousand dollars worth of humanitarian aid to the orphans and guardian parents across the country. In addition, KYM distributed sacrifice meat equivalent of 301 shares slaughtered with the contributions of philanthropists. KYM which offers a helping hand to countries worldwide […]