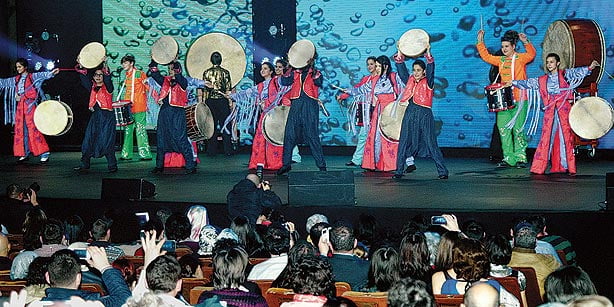 Filling in the largest performance hall in the nation’s capital, approximately 4,000 Romanians and Turks shared the songs and poems of students educated in the 11 Turkish schools across country. Praising the success of the Turkish schools in his country, Romanian Minister of Education Remus Pricopie said Lumina Educational Institutions have been successfully operating in his country over the past 20 years, bringing Romania the most medals in the Science Olympiads. Congratulating the administrators and teachers at the schools, Pricopie said the government supports education in multiple languages.

Turkish schools in the country have a total of 3,250 students from 41 different nationalities; Turks also established one of the two internationally accredited high schools in Romania.

Addressing the large crowd, Fatih Gürsoy, the general manager of Lumina Educational Institutions in Romania, said that they have won a total of 400 medals in different competitions. According to Gürsoy, the schools have aimed to serve peace, humanity and fraternity since their foundation in 1994.

The Turkish Olympiads in Bucharest determined the runner-ups for the final Olympiads to be held in İstanbul in May. The event was hosted by Ramazan Ümit Şimşek from Turkey and Andrea Marin, a well-known Romanian TV show host.

A number of members of the Turkish Parliament, including former Justice and Developent Party (AK Party) İzmir Deputy İlhan İşbilen, former AK Party Kütahya Deputy İdris Bal and İstanbul Deputy Muhammet Çetin were also in attendance at the event in Bucharest. Presenting students their medals at the end of the Olympiads, İşbilen said, “These young people display examples of the peaceful coexistence of different cultures.”

During the event, Fatih Gürsoy announced the establishment of an additional educational center for the Turkish schools. The new school will have a campus for institutions from kindergarten to high school and will be able to accommodate 2,000 students.

Before the gala night, a bake sale was organized by Turkish women in Bucharest, during which the locals enjoyed specialties of Turkish cuisine.

While many foreign diplomats serving in Bucharest attended the event, there was no representative from the Turkish Embassy unlike in the previous years. The absence of any Turkish diplomats at the event was tied to the reported instruction of Foreign Minister Ahmet Davutoğlu to ambassadors not to attend the Turkish Olympiads this year.

In addition to the primary and high schools, Turks in Romania established Lumina University in 2010. Currently, 300 students are enrolled in the university, at which the medium of education is Romanian.