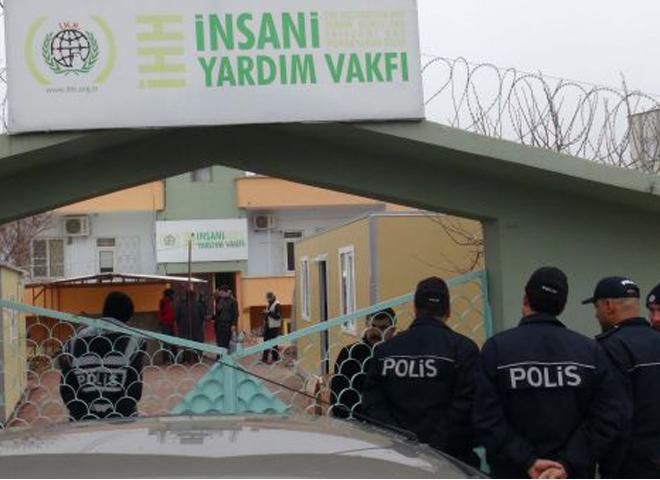 Turkish anti-terrorism police carried out raids in six cities on Tuesday, detaining at least five people with alleged links to al-Qaida, including two employees of a government-supported Islamic charity group that provides aid to Syria, media reports and officials said.

The police operation came as Prime Minister Recep Tayyip Erdogan’s government is fighting allegations of corruption. It has been forced to dismiss three government ministers whose sons were detained in raids by police investigating alleged illegal money transfers to Iran and bribery for construction projects.

The government says the corruption probe was instigated by followers of a moderate Islamic movement led by U.S.-based cleric Fethullah Gulen. The government insists that Gulen’s supporters have infiltrated Turkey’s police and judiciary and are out to discredit the government ahead of local elections in March. Gulen denies being behind the vast police corruption probe that has targeted people close to Erdogan.

The Humanitarian Relief Foundation, known by its initials IHH, said that police searched its office in Kilis, near the border with Syria on Tuesday, and detained one of its employees. Another IHH employee was detained in Kayseri after a police raid at his home, said Saban Dozduyar, a spokesman for the group’s local branch.

The government and the IHH have no direct links, but the group plays a prominent role in Turkey’s international humanitarian aid efforts. The anti-terrorism police chief for Kilis was removed from his post and reassigned to a juvenile crime department hours after the raid, Anadolu reported, a sign that the government was hitting back at police who carried out the raid. The Dogan news agency said the counter-terrorism police chief in the city of Van who coordinated Tuesday’s raids was also reassigned to another post.

The IHH denied any ties to al-Qaida.

The police raid “is a deliberate attack on the IHH,” said Yasar Kutluay, the group’s secretary general. “They are trying to portray the group as an organization with links to terrorism.”

He blamed Israel and Gulen’s supporters, for the operation — a charge Gulen’s movement immediately rejected as “slander and false incrimination.”

IHH operated a Gaza-bound ship that was stormed in 2010 by Israeli security forces in a raid that killed nine pro-Palestinian activists. The group has played a major part in providing food and other aid to Syrian refugees in Turkey and its aid workers cross into Syria to provide help to people there.

The Anadolu Agency said a Qatari aid organization, working out of the IHH office in Kilis, was also searched, although no one was detained for questioning.

Earlier this month, Turkish media said police had stopped a Syria-bound aid truck near the border on suspicion that it was carrying ammunition. Turkish officials prevented the truck from being searched and later claimed it was carrying humanitarian aid to the Turkmen community in Syria.

Meanwhile, Erdogan on Tuesday called the corruption probe “the most perverse” attempt to bring down his government.

The government removed hundreds of police officers from key posts as it fights to contain the corruption scandal and has also introduced a highly contentious draft bill that would tighten its grip over a council that appoints judges and prosecutors and strengthen control over the judiciary.

Opposition parties say the bill is unconstitutional and would limit the independence of the judiciary. A brawl broke out over the measure while it was being debated in a parliamentary committee over the weekend.

The government said Monday it had no intention of withdrawing the legislation. Erdogan, however, said Tuesday that he could withdraw the bill if opposition parties agree to constitutional changes concerning the appointment of judges and prosecutors. He gave no detail on what the changes would entail.

International charity organization Kimse Yok Mu continues its humanitarian aid campaign in Bosnian which was hit by floods severely in May. Arriving in the city for the second time with three semi-trailer trucks, volunteers from Kimse Yok Mu delivered food, blankets and couches to the flood victims.